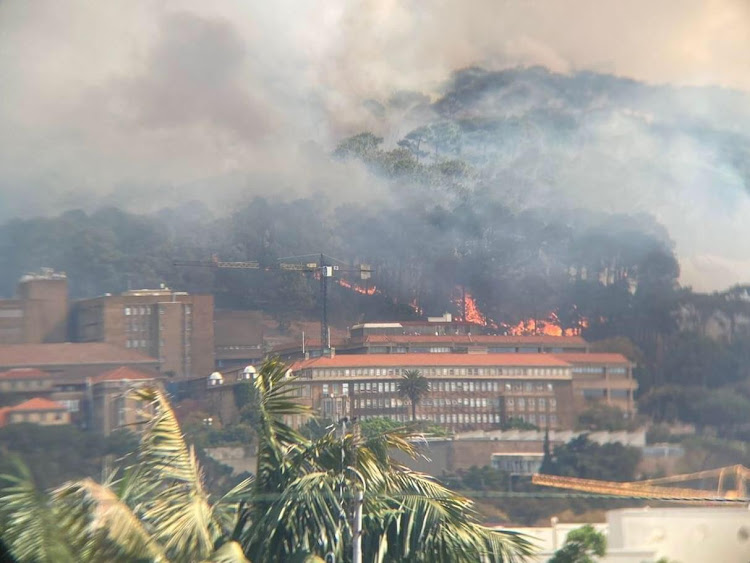 Fire fighters tried to prevent a fire from spreading to the University of Cape Town on Sunday after it gutted part of the Rhodes Memorial restaurant.
Image: Supplied

A section of Rhodes Memorial restaurant was gutted in a mountain fire which was spreading towards the University of Cape Town on Sunday.

Firefighting crews from the City of Cape Town, Working on Fire, and Table Mountain National Park are currently fighting the vegetation fire which started at 8.45am on Sunday.

They are being assisted by three helicopters which are water-bombing the fire from the air.

“Fire crews were immediately dispatched to the scene, with the fire currently spreading from Rhodes Memorial towards UCT, ” he said.

Carelse said a section of the tea room at Rhodes Memorial was destroyed and urged people to stay away from the area.

“More resources are currently on their way to assist firefighting efforts. These include teams from Working on Fire and Table Mountain National Park. Three choppers are also water-bombing the area,” he said.

A hot, light northerly wind was contributing to very warm conditions in the Western Cape and Northern Cape on Sunday with temperatures forecast at 33°C for Cape Town.

“A heatwave with persistently high temperatures is expected in Richersveld, Kamiesberg municipalities of the Northern Cape and northern parts of West Coast District, Western Cape,” read the weather advisory.

The Cape Town traffic department said the M3 inbound between Rhodes Drive and Union Avenue as well as access roads from Woolsack Drive and Princess Anne Avenue have been closed.

Meanwhile, SANParks Table Mountain National Park has urged all hikers within the Newlands and Rhodes Memorial area to evacuate with immediate effect.

“Cars parked within these sections need to be moved as a matter of urgency.

“The fire is currently out of control and we request that all onlookers please refrain from entering the area and keep the area clear for emergency vehicles to pass.”

Four killed as police open fire at workers in Bangladesh

At least four people were shot dead and many injured on Saturday as police opened fire at workers demanding a pay rise at a Chinese-backed coal-fired ...
News
1 year ago

Fire breaks out at Charlotte Maxeke Hospital, but services not affected

A fire broke out at Charlotte Maxeke Hospital in Parktown, Johannesburg, on Friday morning, the Gauteng health department confirmed.
News
1 year ago