The University of Cape Town (UCT) said all students on its main campus were being evacuated by emergency services support staff on Sunday as a runaway wildfire spread onto the campus grounds.

In a statement, after the outbreak of a fire at 8.45am which gutted a section of the Rhodes Memorial restaurant, UCT said students were taken to predetermined locations.

UCT spokesperson Elijah Moholola said reports that the university was evacuating hydrogen tanks from its science labs could not be confirmed. 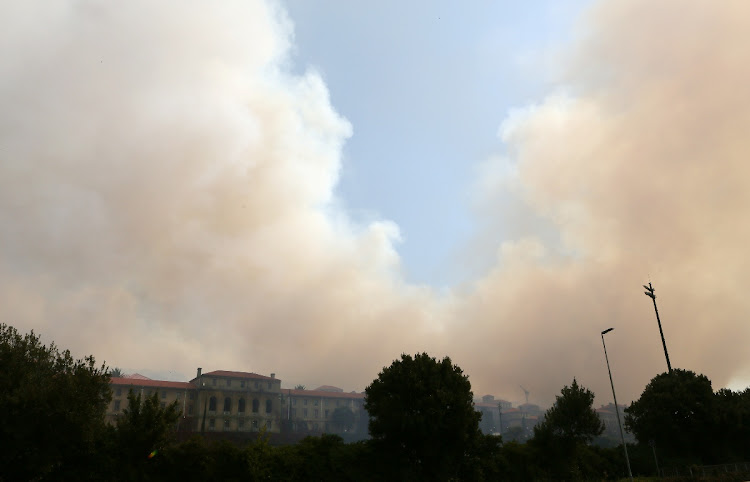 University of Cape Town students have been evacuated as a runaway fire that started at the Rhodes Memorial on Sunday morning spread onto the campus.
Image: Ruvan Boshoff

PLEASE NOTE: All UCT students have been evacuated from campus by emergency services support staff. We have taken them to pre-determined locations. We will continue to work with & support Sanparks & the City of Cape Town to extinguish this fire. Please stay safe first & foremost.

“We don’t have any info at this point and won't be getting it any moment soon as teams are working at various aspects of containing the fire. As soon as we are able to share further info, we will do so and respond to specific questions,” he said.

“We will continue to work with & support SANParks & the City of Cape Town to extinguish this fire. Please stay safe first & foremost,” read the statement.

“We thank all emergency services support staff who have worked with the university, City of Cape Town and SANParks thus far. As soon as more information becomes available we will share it,” it read.

The vegetation fire started just above Philip Kgosana Drive and was soon being fought by three helicopters water-bombing from the air in aid of firefighting crews on the ground from the City of Cape Town, Working on Fire, and Table Mountain National Park.

City of Cape Town fire and rescue services spokesperson Jermain Carelse said a section of the tea room at Rhodes Memorial had been destroyed and urged people not to enter the area.

Hundreds of UCT students evacuated from residences as a raging fire rips through Table Mountain and sorroundings in Cape Town. pic.twitter.com/fpy1ANU0LW

“More resources are currently on their way to assist firefighting efforts. These include teams from Working on Fire and Table Mountain National Park. Three choppers are also water-bombing the area,” he said in a statement on Sunday morning.

A hot light northerly wind was contributing to very warm conditions in the Western Cape and Northern Cape on Sunday with temperatures forecast at 33°C for Cape Town.

A video taken of the fire showed an explosion occurring inside the burn area. No explanation has been given yet as to what caused the explosion.

Several people taking videos of the fire while hiking on the mountain slopes behind Table Mountain described the speed at which the fire was moving.

Videos appeared to show the fire already having reached the University of Cape Town  grounds by midday as students evacuated across sports fields under a blanket of thick smoke.

Firefighters have been working since Sunday morning to extinguish the runaway fire that has engulfed Rhodes Memorial and is spreading towards the ...
News
9 months ago

A section of Rhodes Memorial restaurant was gutted in a mountain fire which was spreading towards the University of Cape Town on Sunday.
News
9 months ago

Charlotte Maxeke hospital in Parktown, Johannesburg, has been closed for a week after a fire on Friday.
News
9 months ago