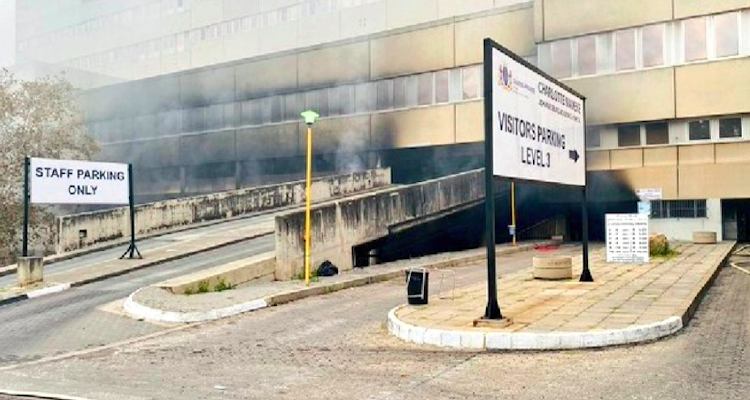 Charlotte Maxeke Hospital was temporarily closed after a fire at the facility.
Image: Thulani Ndaba/Twitter

No issues were reported during the last inspection at Johannesburg's Charlotte Maxeke Academic Hospital, and its fire hydrants were operational, says the Gauteng department of health.

She said information received from this department was that an inspection at Charlotte Maxeke Hospital was done in October/November last year and there were “no findings”.

“This means that the hydrants were all in good condition and functional,” she said.

Wynand Engelbrecht, the CEO of Fire Ops SA, a private company that took part in the firefighting operation, said at the weekend the hospital's fire hydrants were not working.

The fire broke out at 11.30am on Friday, and at 9.30pm the health department said it had “reignited”. But Engelbrecht disputed this. He said he would write to the ministers of health, co-operative governance and public works to call for a “complete revamp” of the Parktown hospital's fire protection system.

The hospital has been temporarily closed after a fire forced the evacuation of nearly 700 patients.

Support continues to pour in for medical staff at Charlotte Maxeke Academic Hospital in Johannesburg.
News
1 year ago

Charlotte Maxeke Hospital in Johannesburg, which has been closed after a fire forced the evacuation of nearly 700 patients, had no working fire ...
News
1 year ago