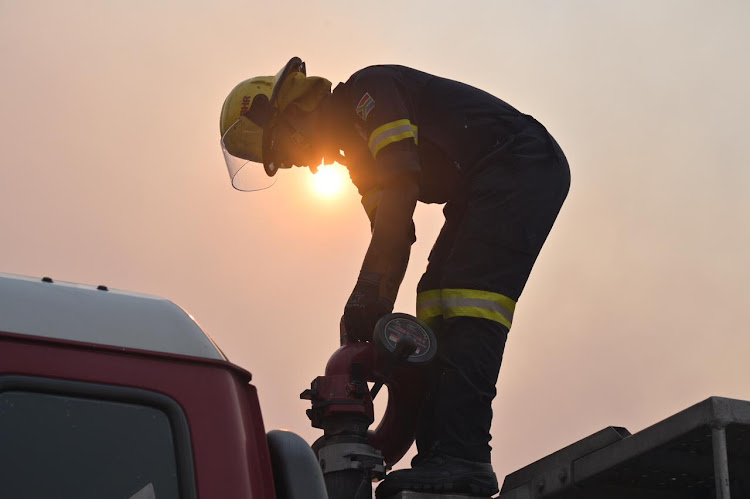 Firefighters have been working since Sunday morning to extinguish the runaway fire that engulfed Rhodes Memorial and spread towards the University of Cape Town.
Image: Bruce Sutherland/City of Cape Town

As runaway fires continue to rip through Cape Town, precautionary evacuations have been carried out in the Vredehoek area.

One evacuee is 18-year-old Shannon McAuliffe, who left her home in the early hours of Monday morning. She and her family are seeking refuge at the Mount Nelson resort. They do not know how much damage has been done to their home, as they have not been permitted back in the area.

McAuliffe shares her story with us:

On Sunday night, the city of Cape Town reported a wildfire on the slopes of Table Mountain National Park which continues to burn.

At the time SANParks said an initial investigation pointed to a fire neglected by a vagrant as the origin of the blaze.

However, a suspect was taken into custody on Sunday night as the City of Cape Town investigated reports that the original blaze may have been due to arson and amid reports of additional fires being started. This was disclosed on Monday by mayoral committee member for safety and security JP Smith.

Smith confirmed that one suspect in his 30s was taken into custody on Sunday night in the vicinity of Devil’s Peak. He added that police were investigating and that further details would follow as they became available.

A suspect was taken into custody on Sunday night as the City of Cape Town investigates reports about the original blaze being due to arson and of ...
News
1 year ago

Minister of local government, environmental affairs and development planning in the Western Cape, Anton Bredell, said conditions had deteriorated overnight into Monday morning with the wind picking up strength and fanning the flames.

Five firefighters have sustained burn injuries, while more than 250 firefighters from the city, Table Mountain National Park, Working on Fire and Volunteer Wildfire Services remain on the ground.

More than 400ha of mountainside have been burnt thus far and the fire is yet to be contained, SANParks said on Monday morning.

Bredell urged those able to avoid the City Bowl on Monday and work from home to do so.

Academic activity at the University of Cape Town and schools in nearby areas has been suspended.

The fireline is threatening the City Bowl area, having started on the lower slopes of Devil’s Peak near Groote Schuur Hospital on Sunday morning.

It is being monitored and at-risk areas are being evacuated as needed.

Cape Town's City Bowl residents are on high alert on Monday morning as strong winds fan the fires that ignited on Sunday.
News
1 year ago

Cape Town residents, corporates, politicians and organisations have rallied to help thousands of UCT students and citizens affected by the fire that ...
News
1 year ago

A section of Rhodes Memorial restaurant was gutted in a mountain fire which was spreading towards the University of Cape Town on Sunday.
News
1 year ago

Firefighters have been working since Sunday morning to extinguish the runaway fire that has engulfed Rhodes Memorial and is spreading towards the ...
News
1 year ago