But hotspots remain and flare-ups are expected to continue 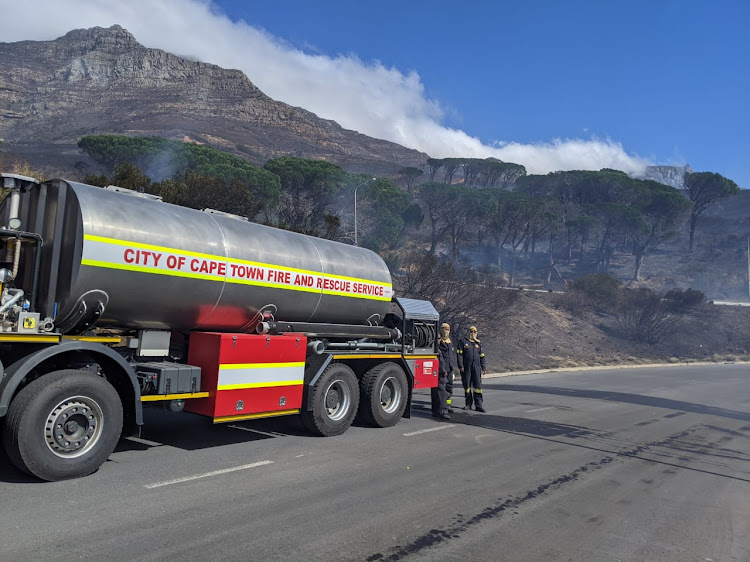 The raging fire on Devil's Peak was largely under control on Monday afternoon but hotspots and flare-ups are expected to continue.
Image: Claire Keeton

The fire which has been raging on Devil’s Peak in Cape Town since Sunday morning is “largely contained at this stage”, fire and rescue services said at 3pm on Monday.

Spokesperson Jermaine Carelse said in an update: “The incident commander at the Roeland Street station said it was contained at this stage but there was still active firefighting going on in certain areas.”

Hotspots remained below the University of Cape Town (UCT), above Vredehoek, University Estate and Walmer Estate, and along Philip Kgosana Drive.

Firefighters along the freeway were dousing flare-ups in the bushes on the residential side bordering the university and Walmer Estate, but they said it was under control compared with earlier on Monday.

“We expect this will be a protracted [fire] with flare-ups and tree stumps burning but by Thursday or Friday it should be contained. It is an ongoing process,” Carelse said, noting the gale-force winds howling across Cape Town.

The wind has grounded helicopters and their aerial crews, which can play a critical role in controlling fires by dumping water on the flames from ...
News
1 year ago

The air was still thick with smoke and ash but residents spoke about the relief of having escaped the inferno.

Varsha Rajkumar, whose house is right below the freeway, said her car was packed and  ready to evacuate until firefighters — backed by organised community firefighting volunteers — were able to contain the flames.

“I live 100m from the edge of the fire. From 7am this morning we have been out there wetting the ground,” she said. The fire jumped across the freeway to the middle island and her side by midmorning.

“There was only so much we could do,” Rajkumaf said, welcoming the fire engines and  crew in their neighbourhood. “The fires were vast, and they have limited resources.”

The smoke-smudged firefighting crew on the scene said it was too early to say the fire was under control but “the good news is that it has been damped down”.

More than 400 hectares of mountainside has been burnt so far and the fire has yet to be contained, SANParks said on Monday morning.
News
1 year ago

The fire ignited on Sunday morning and flared up with renewed ferocity on Monday morning as the winds picked up to gusts of 50km/h.

The wind grounded helicopters equipped to douse the fires from the air.

School pupils and students were evacuated on Monday morning from areas in Vredehoek and University Estate near to the blaze. UCT’s Jagger Library was destroyed along with irreplaceable special collections.

More than 150 firefighters were on the scene with 32 firefighting vehicles and dozens of metro police and disaster-management teams on the ground.

People with asthma and other respiratory conditions were urged to stay indoors and keep windows closed or leave the fire zone if possible. The city's air quality monitoring unit reported “very high levels of particulate matter” in the air.

Fires in Cape Town spread rapidly overnight on Sunday due to high winds in the area.
News
1 year ago

'Zol' hitmaker Max Hurrell - who ignited social media platforms with his "lockdown anthem" last year - was forced to evacuate when the fire spread to ...
News
1 year ago