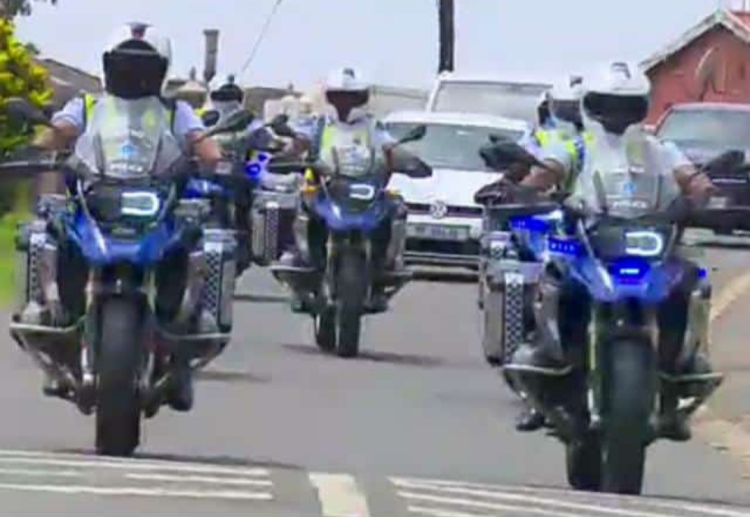 The Zulu royal family has heaped praise on local police services for ensuring that late Zulu monarch King Goodwill Zwelithini's body was escorted seamlessly from Durban to Nongoma in northern KwaZulu-Natal after his passing last month.

The king's body was transported in a private funeral home's hearse from Inkosi Albert Luthuli Hospital and accompanied by senior traditional leaders to make the three-hour journey to the Osuthu palace amid a strong police presence.

In a letter addressed to acting provincial commissioner Maj-Gen Thulani Gonya and Supt Jabulile Mathews of the eThekwini metro police, traditional prime minister of the Zulu nation, Prince Mangosuthu Buthelezi, said: “On behalf of the regent, Her Majesty Queen Mantfombi Dlamini Zulu and the Zulu royal family, I wish to express our deepest gratitude for your support and assistance following the passing of His Majesty on March 12.

“We are humbled by your swift and efficient response in availing resources to escort His Majesty's body from Durban to Nongoma.

“Thank you for responding so willingly to my request.”

Speculation over who will succeed the late Zulu monarch King Goodwill Zwelithini has the potential to create "conflict and disquiet" for the grieving ...
News
1 year ago

Buthelezi said the manner in which the police handled the request “speaks of the tremendous respect felt for His Majesty and the Zulu nation.

“It enabled a difficult task to be performed with the dignity befitting our monarch.

“You eased our burden at a time when such efficiency was most needed. In that painful moment, South Africa witnessed a police service in which we rightly take pride.”

eThekwini metro police head Steve Middleton told TimesLIVE: “We were humbled by the request to provide an escorting service for the sad passing of His Majesty the king.

“On numerous occasions in the past we've had the honour of escorting both the king and the prince when in eThekwini, as well as hundreds of various heads of state.

“I am so proud of metro police colleagues. It isn't just that we did the escort, it is the manner in which colleagues do all functions, with dedication and professionalism — truly magnificent beyond belief.”

The Zulu monarch, who died last week, was buried on Wednesday at KwaNongoma, his ancestral home
News
1 year ago