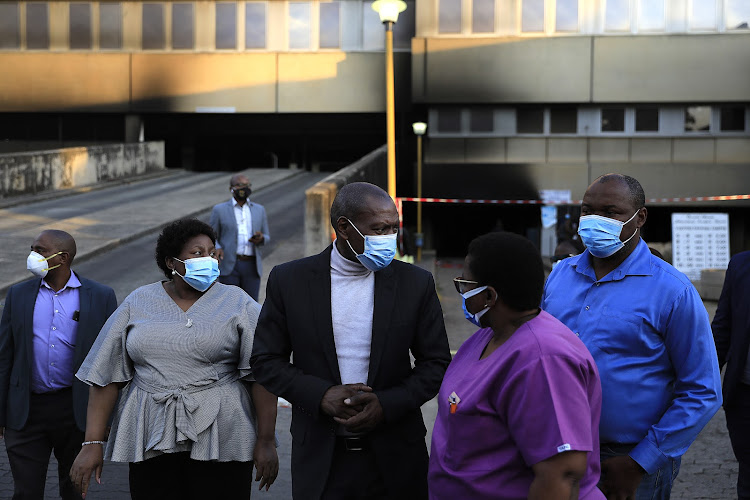 Health minister Zweli Mkhize visited Charlotte Maxeke Hospital on Tuesday to assess the extent of damage caused by the fire and discuss the recovery plan for the hospital. He was accompanied by various people and hospital staff.
Image: ALON SKUY​

Mkhize was speaking during a visit to the closed hospital to assess the extent of damage caused by the blaze on Friday and to discuss a recovery plan.

Makhura visited the hospital on Saturday and said it would remain closed for a week. Patients who needed medication and care were advised to go to nearby hospitals.

Mkhize said on Tuesday the fire had caused significant destruction. He said the fire had started on the dispensary side of the facility.

During a visit on April 20 2021, health minister Zweli Mkhize said the Charlotte Maxeke Hospital in Johannesburg lost R40m worth of medical supplies and personal protective equipment when a fire broke out at the facility.The hospital is expected to return to full operation next week.

“We have seen in some areas there has been destruction with the floors caving in. Holes have appeared on different floors. It was a huge fire resulting in a huge amount of destruction,” said Mkhize.

The shutdown of Charlotte Maxeke is set to push Gauteng’s hospitals, already struggling to cope with Covid, to their limits
News
1 year ago

The minister said that no patients were injured by the fire. The tally of damage sustained had yet to be determined.

Gauteng health department spokesperson Kwara Kekana said on Friday the fire had affected the dispensary where all the dry and medical items were kept.

Kekana said safety officers for the department of infrastructure development conducted inspections twice a year at hospitals. An inspection was done at the hospital in October or November 2020 and there were no adverse safety findings.

“This means the hydrants were all in good condition and functional,” she said.

However, Wynand Engelbrecht, CEO of Fire Ops SA, a private company that took part in the firefighting operation, said at the weekend the hospital’s fire hydrants were not working.

He said he would write to the ministers of health, co-operative governance and public works to call for a “complete revamp” of the Parktown hospital’s fire protection system.

Support continues to pour in for medical staff at Charlotte Maxeke Academic Hospital in Johannesburg.
News
1 year ago

EDITORIAL | In SA, all fires do not burn equally

On the same day as the Cape Town disaster, a blaze destroyed lives but went relatively unnoticed
Opinion & Analysis
1 year ago