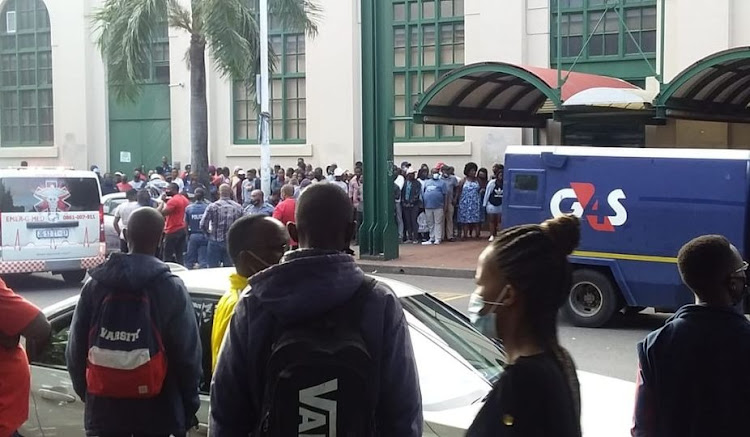 The scene along Dr AB Xuma Street in Durban central where a police officer was shot and badly injured on Tuesday.
Image: Supplied

A Durban police officer was shot in a botched cash-in-transit heist at the Workshop in the CBD on Tuesday.

Rescue Care's Kyle van Reenen said paramedics responded to a call about a shooting near a popular shopping mall in Dr AB Xuma Street about 4pm.

"On arrival, a male police officer was found to have suffered a gunshot wound to his chest and was in a serious condition. Advanced life support emergency care practitioners worked to stabilise the man while he was rushed to a nearby hospital for further immediate definitive care."

Van Reenen said reports from the scene indicated that the officer took fire from a number of armed suspects during an attempted cash-in-transit robbery.

"The police will be investigating the matter further."

Two men have been arrested for the murder of an off-duty KwaZulu-Natal police officer who attempted to save a woman who was being assaulted in ...
News
9 months ago

Two men have been arrested after a shoot-out which claimed the life of a KwaZulu-Natal policeman and left another fighting for his life in hospital ...
News
9 months ago

The acting chief was allegedly abducted from his home at gunpoint.
News
9 months ago