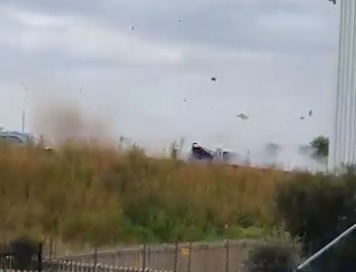 A screenshot from the video last month shows debris flying through the air as CIT robbers blew up a cash van in northern KZN.
Image: Screenshot

Members of the Hawks in KwaZulu-Natal have arrested seven men believed to have been those involved in a cash-in-transit heist in which an armoured vehicle was blown up in broad daylight in northern KZN in March.

The incident occurred in Babanango, between Nkandla and Melmoth, and was caught on camera by bystanders at a nearby business premises.

In a statement on Wednesday, provincial Hawks spokesperson Capt Simphiwe Mhlongo said five of the alleged perpetrators were arrested last week Monday, while the remaining two were nabbed on Tuesday.

Video 2 - It is claimed police arrived at the scene about 7 minutes later. https://t.co/au8PmIc9Eq pic.twitter.com/FwKg9yCZCo

“On March 29 security guards were travelling from Nkandla to Melmoth when they were accosted by the suspects at a gunpoint. The suspects fired shots towards the cash van and the driver was forced to stop. They robbed them of their service firearms and undisclosed amount of cash. The suspects then fled in their getaway motor vehicle.”

TimesLIVE reported that the incident occurred along the Umhlathuze bridge.

“The two accused briefly appeared in the Babanango magistrate’s court on Wednesday. They were remanded in custody and the case was postponed to April 26, when they will join their co-accused,” said Mhlongo.

A police officer was shot in a botched cash-in-transit heist at the Workshop in the Durban CBD on Tuesday.
News
1 year ago

A cash reward is on offer to catch the culprits involved in a cash-in-transit heist in the Western Cape, during which one guard was killed and three ...
News
1 year ago

A cash van was blown up and robbed in Boksburg on the East Rand on Monday by a gang driving luxury vehicles.
News
1 year ago