By alex patrick AND Alex Patrick

Image: ALON SKUY​ Health minister Zweli Mkhize visited Charlotte Maxeke Hospital on Tuesday to assess the extent of damage caused by the fire and discuss the recovery plan for the hospital.

For almost three hours in front of a charred building, the hubbub of the waiting press was only momentarily disturbed by the screeching of overhead hadedas.

On Tuesday they were awaiting an update on the fire at the Charlotte Maxeke Academic Hospital. But first health minister Zweli Mkhize had to be briefed in a “briefing” which wasn’t brief.

As time ticked on, the complexities of what happened last Friday were realised because there were many things which needed explaining.

Things like: how did the fire start and where; what was the extent of the damage and how much would it cost to repair; was anyone injured and what happened to the water supply meant to extinguish such a fire?

The answers are still sketchy. 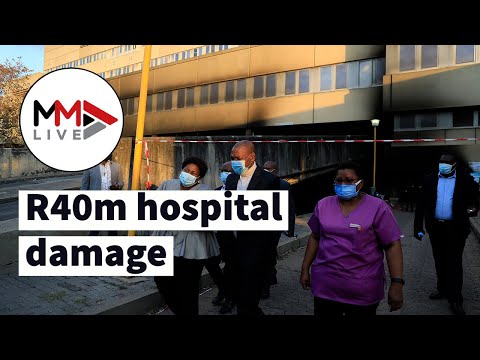 At 4.45pm the leaders emerged to take a peek at the smoldering insides. They were  followed by the pack of reporters.

They could only look in from the entrance to parking lot three because it was too dangerous to enter. Structural damage had been reported there and the 30-odd people risked collapsing the floor.

On Tuesday this week cars were still parked inside the building and the constant pouring of water was heard from a burst pipe. The flare-up had been so quick and hot that everything remained behind - even the security guard’s vetkoek.

The minister said earlier predictions that it would take a week before the hospital reopened were unrealistic as they would not have an accurate timeframe until the damage had been inspected.

Motara said the building would be underpinned on Wednesday to allow police entry for forensic investigation to determine the exact cause of the fire. Thereafter the department would do their own investigation and then the repairs could begin.

The initial inspection pointed to structural damage in the car park area in which a floor has collapsed. There was damage to the hospital building near the area where the fire started in the dispensary.

Mkhize said parts of the floor could collapse but would need thorough inspection.

The cost of the building repair is yet to be determined but an estimated R40m in medical supplies and personal protective equipment was part of what the minister called “a huge amount of destruction”.

According to Motara, allegations that the fire hydrants were in disrepair were inaccurate.

She said when firefighters arrived on scene they were unable to find the hydrant in situ. They went to the next closest but their hoses did not couple with the hydrant. She said the sprinkler system was working.

There are 160 hydrants at the hospital.

He said the hospital’s fire hydrants were not working and that he would write to the ministers of health, co-operative governance and public works to call for a “complete revamp” of the Parktown hospital’s fire protection system.

He also told the publication it was he who called for the hospital to evacuated, claiming  “by 9pm there was no clear plan”.

Mkhize said on Tuesday: “The real problem was that nobody expected the fire to get big enough to warrant an evacuation.”

He said he called in the afternoon but was told there was no need to evacuate.

She said medical staff and cleaners had accompanied the nearly 700 patients evacuated to hospitals around the province.

A colleague asked the minister about a patient who allegedly died in the hospital on Friday.

“Unfortunately the facility sees death at any time. But no patient died from the fire.”

The patient had been chronically ill.

Bogoshi said the hospital had set up a help line for families needing to find their relatives after patients were evacuated.

She said there a few families had not been able to locate relatives due to them failing to leave their correct information.

The minister said the fire was a crisis with a happy ending and thanked all services who came to the rescue, including the private services.