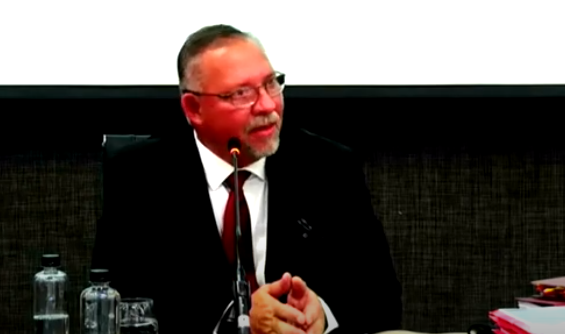 Advocate Johannes Roelofse said he could not refuse when he was asked to defend a nurse accused of injecting her stepson with HIV-infected blood.
Image: screengrab / JudgesMatter

The advocate who in 2004 defended a Bushbuckridge nurse accused of injecting her four-year-old stepson with HIV-infected blood has revealed the difficulties he had in taking on that case.

The case was brought up as advocate Johannes Roelofse was being interviewed by the Judicial Service Commission (JSC) on Wednesday. He was hoping to secure a seat in the high court division in Mpumalanga where he is currently an acting judge.

ANC MP China Dodovu, who is one of the commissioners, asked Roelofse about whether he truly subscribed to the constitutional clause that referred to “the right to life”.

Roelofse answered in the positive, reflecting on the tough times he had working in South African prisons in the 1980s when, at the time, executions were still being carried out. He was emotional as he spoke about how on Thursdays, they would hear the gallows during executions.

Dodovu asked him how, if he felt that way, he could have taken on the case where he defended the nurse.

I could not refuse the brief.

“I could not refuse the brief,” Roelofse said. “An advocate may not refuse a brief, because imagine if advocates could choose who they want to represent and not. We have to deal with the most heinous crimes and represent those people, otherwise the promise that the constitution gives — that everybody is entitled to legal representation — will come to naught.

“That is why attorneys can decide not to take on a client, but advocates are not allowed that luxury,” he said, adding that if you had the expertise and time, you were handed a case.

“You cannot say no.”

Roelofse spoke about the great difficulties he faced during that case, saying he was even assaulted with knobkerries outside court. In one instance, a police officer had to fire shots into the air to disperse a mob that was attacking him.

“Did I like it to represent a person with those allegations against them? No. Was it for a duty? Yes — and that is what the public often do not understand,” he said, becoming emotional.

In 2006, the nurse was found guilty of attempted murder.

In all her years as a judge, only one judgment of Judge Segopotje Mphahlele had ever been overturned and this was the coffin assault case.
News
8 months ago

On a lighter note, another point raised during Roelofse’s interview was that he had penned the first ruling on the Covid-19 regulations at the start of the lockdown year in 2020.

Mpumalanga judge president Frans Legodi asked him why he had ended that judgment with the words “Nkosi sikelela iAfrika”.

“That is how I felt. We were at the very beginning of Covid-19 and the day that I considered the urgent application, there were only two people in SA who had been infected. Three days later, many more were infected and I was concerned about us and Africa because we do not have the same resources as the rest of the world,” he said.

“So every word there, I meant and I wrote it because I wanted to say the prayer.”

Roelofse did not make the cut, failing to be shortlisted for one of three judges' positions which are available.

Once slated for close ties to ANC, Gcina Malindi returns to JSC for shot at judge's seat

The intervening period "is more than long enough to allay any fears that I come here as being supplanted from Luthuli House", acting high court judge ...
News
9 months ago

In principle, lawyer agrees that in appropriate circumstances, a very ill person can take the position to end his or her life - but there's a proviso
News
9 months ago