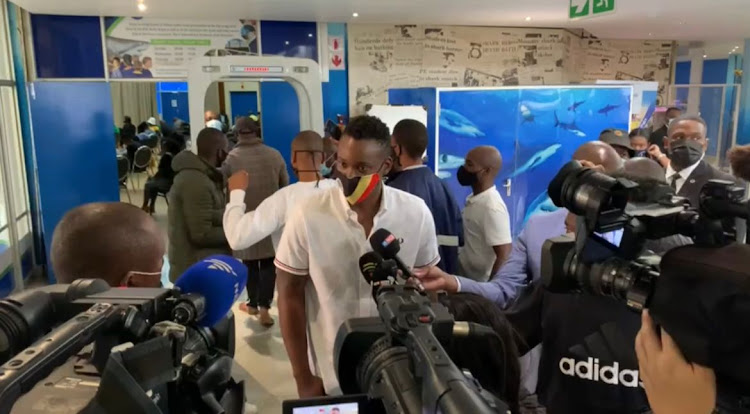 Duduzane Zuma at the Sharks Board in Umhlanga on Thursday, where the South African National Civic Youth Congress is hosting a belated birthday celebration for former president Jacob Zuma.
Image: Rogan Ward

Duduzane Zuma received a celebrity welcome at the Sharks Board in Umhlanga, north of Durban, on Thursday, where the South African National Civic Youth Congress is hosting a belated birthday celebration for his father, former president Jacob Zuma.

Duduzane  was greeted with elbow shakes and requests for selfies at the party, which was attended by about 100 people.

The former president is expected to attend.

Duduzane Zuma at the Sharks Board where Sanco have gathered for a belated birthday celebration for former pres Jacob Zuma
🎥: Rogan Ward pic.twitter.com/XdOwcdBITd

One of the attendees, Congress of SA Students' Sandiso Zulu, said the event was to celebrate and support former president Zuma.

“We are here to support him as the youth, because he has done a lot for the youth,” he said.

Zulu said they believed Zuma was innocent until proven guilty.

The event comes a day after Zuma's legal team filed a formal notice of withdrawal in his corruption trial which was set to commence on May 17.

It is understood that while the National Prosecuting Authority has said it is ready to proceed with the trial, there will inevitably be delays for a new legal team to be appointed and briefed.

Jacob Zuma's legal team's formal notice of withdrawal of their services in his corruption trial in the Pietermaritzburg high court on Wednesday could ...
News
2 weeks ago

Jacob Zuma’s lawyers withdraw ahead of corruption trial next month

Lawyers acting for former president Jacob Zuma in the corruption trial due to start next month filed a formal notice of withdrawal in the ...
News
2 weeks ago