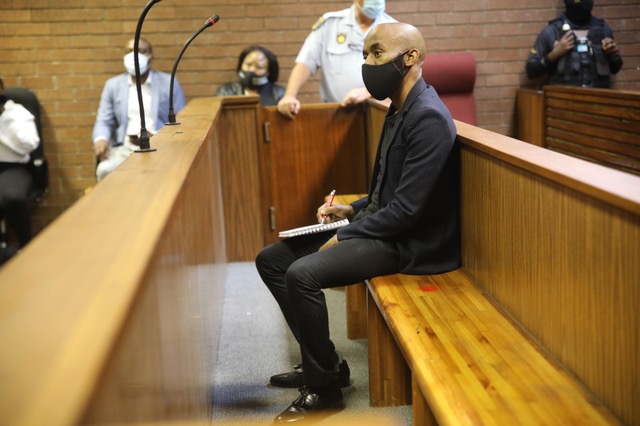 Ntuthuko Shoba, the alleged mastermind behind the murder of heavily pregnant Tshegofatso Pule, reappeared at the Roodepoort magistrate's court on Thursday for his second bail application.
Image: Deepa Kesa/TimesLIVE

A series of messages between Tshegofatso Pule and the man accused of her murder, Ntuthuko Shoba, showed that he was absent, did not care about Pule’s wellbeing or the imminent birth of their baby.

This is according to the state, which also revealed this was the second time Pule had been pregnant with Shoba’s child.

The previous pregnancy was aborted.

Shoba appeared in the Roodepoort magistrate's court on Thursday, for the state's response to his second application for bail.

The 28-year-old Pule, who was eight months pregnant, was killed in June 2020, with her body found hanging from a tree.

Shoba was arrested in February after the first person accused of the crime, Muzikayise Malephane, entered into a plea agreement with the state. Now serving a 20-year jail term, he alleged that he had been hired to kill Pule because Shoba feared his “wife” would find out about Pule's pregnancy.

Ntuthuko Shoba said he "felt the need" to help the police investigate the disappearance of Tshegofatso Pule, whose murder he is accused of plotting.
News
3 months ago

Shoba has previously applied for bail, but was unsuccessful. At the time, magistrate Delize Smith said he had “not shown that he will stand trial”.

Responding to Shoba’s affidavit after his last court appearance on April 6, state prosecutor Paseka Temeki told the court that Pule was left to face the pregnancy on her own and was repeatedly left disappointed by Shoba.

During court proceedings, Shoba, who was clad all in black, took notes in the dock while Temeki was reading his responding statement. Temeki told the court that Shoba:

He said most of the communication between the two was initiated by Pule.

The applicant’s submission is an attack on the deceased’s personal life and indeed littered with mudslinging.

“The WhatsApp messages are proof that the applicant has been absent most of the time, hiding behind work and at times his [other] girlfriend.

“In actual fact, from the deceased’s [Pule] WhatsApp messages, it is clear that she sent the applicant a message saying that she did not want to have another abortion.

“The said WhatsApp messages recount the events relating to the kind of relationship the deceased had with the applicant [Shoba], as well as the said pregnancy.

“Needless to mention, the applicant’s submission is an attack on the deceased’s personal life and indeed littered with mudslinging.”

In a message sent by Pule to Shoba on February 3 last year, she said they needed to talk.

Two days later, on February 5, Pule wrote to Shoba: “We have a situation and that needs to be dealt with ... I need your support ... Time is not on our side cos I want to start going for my check-ups. I don’t want to risk [the pregnancy].

Temeki said Shoba did not “even entertain the doctor or clinic issue” in his response, but indicated he could see Pule the next day — which he failed to honour.

After failing several times to honour his promise to take her to the doctor, Pule told Shoba that she was stressed and she did not choose to be pregnant “twice with your child”.

A family WhatsApp group that Tshegofatso Pule set up eight months before she died has become her legacy.
News
5 months ago

“I know you don’t want this child but I was not going to live with myself gore [sic] I aborted a child ka three months [sic]. I’m not that evil ... I just felt God was going to punish me for doing that. And to think it was not my first time doing it.

“Sorry for ruining your plans of life — I did not mean to.”

Temeki told the court that Pule’s messages indicated she felt that Shoba wished  something could happen to the baby.

At the time she was four months pregnant and had not seen a doctor.

Shoba told Pule that he was “getting tired of this” and his patience was running out: “You are getting frustrated cos you are forcing yourself to be here. It’s not natural.”

Finally, on February 25, Pule was able to see a doctor — without Shoba — after he sent her about R500 through e-wallet.

She again saw the doctor alone on March 4 and asked Shoba if he was not planning to tell his family about the pregnancy.

Temeki said Shoba promised to tell his family by the end of March. However, Shoba also told Pule that they should wait for the baby to be born to get DNA results done, after being pressurised to allow the two families to meet.

The matter has been postponed to April 26.

Ntuthuko Shoba, the man accused of being the mastermind behind the murder of his eight-month pregnant lover Tshegofatso Pule, has made startling ...
News
4 months ago

Ntuthuko Shoba, who is accused of ordering the murder of his lover Tshegofatso Pule when she was eight months pregnant, will reapply for bail on ...
News
4 months ago