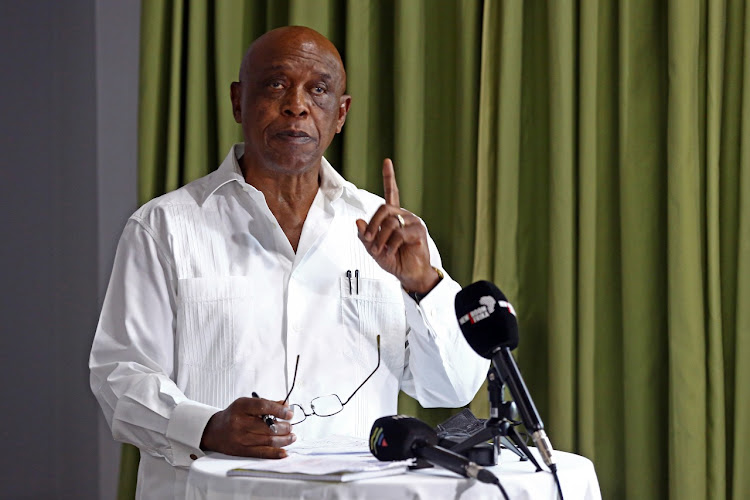 ANC Veteran Tokyo Sexwale stuck to his guns on Thursday about claims he made earlier this week that billions meant to fund free higher education, among other projects, was stolen by government.

Sexwale told eNCA that former president Jacob Zuma and President Cyril Ramaphosa knew about the Heritage Fund and further claimed he was in charge of it together with what he called a “very powerful family”.

Treasury and the SA Reserve Bank (SARB) have since denied his claims. The bank said it was a scam.

In a media briefing on Thursday, Sexwale reiterated his claims.

Here are seven quotes from his presser that made South Africans talk:

I was not scammed

“I don't just walk into things and that's why people asked, 'how could Tokyo Sexwale be scammed'? Let's check this fund. Who are these people? The fund, to me, came out as authentic. There are certain verifications we did to authenticate this fund.”

“I approached Paul Mashatile and told him to bring this to the attention of all the officials because this thing looks like it's developmental, and has a lot of money for the development of all types of infrastructure and philanthropy. SA is in debt today because we are paying a lot of money.”

ANC veteran and businessman Tokyo Sexwale briefed the media after he made claims about billions of rand being stolen from a 'heritage fund'.
News
6 months ago

How the money moved

“The money was in the main account to commercial banks. When it's there you can steal it. Tito asked how was money stolen from the Reserve Bank. ... it was moved illegally into commercial banks and that is where you go for it.”

“For the first time in my life, I laid a charge with the Hawks. There are things they said I should not tell you because there are sensitive investigations going on.”

Speaking up for the poor

“I am everything, but not a thief, and I can't tolerate people who steal from the poor. If I can have a voice for the poor [I'll use it]. I'm defending my people. I have been scammed by my own.”

ANC veteran Tokyo Sexwale found himself topping social media’s trending list this week after he made claims about billions of rands being stolen from ...
News
6 months ago

“I worked according to the mandate, which says negotiate and deal with the matter quietly. It was not a matter of how quickly I can expose them. This is my party. They are my friends and comrades.”

Who stole the money?

“I don't know how many people are implicated. The police are working on that but we know some, because bank accounts were opened here.”

Tokyo fell for the prank, but the radical economic transformation mob took it viral. What’s new?
Opinion & Analysis
6 months ago

Businessman and former cabinet minister Tokyo Sexwale claims that the government rejected a donation of R75bn to the Solidarity Fund, which was ...
Politics
6 months ago

Businessman Tokyo Sexwale has made startling claims about how he was stonewalled by top figures in government when he alerted them about alleged ...
Politics
6 months ago