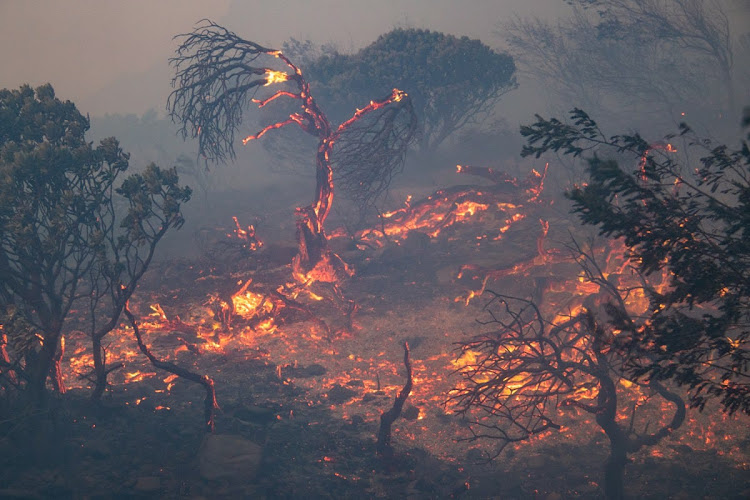 In January 2000, a wildfire torched about 8,800ha on Table Mountain and the urban edge, burning down 80 structures, each one surrounded by alien vegetation.

This wildfire ultimately sparked the formation of the Working on Fire programme, which resulted in a massive clearing of invasives before the next fire roared in.

Come March 2015, a wildfire scorched about 6,000ha on the mountain but only eight structures were lost. Alien trees circled seven of the eight buildings which burnt.

This week’s wildfire on the slopes of Devil’s Peak tore through only 650ha, but heritage buildings, including the University of Cape Town's Jagger Reading Room with irreplaceable special collections, went up in flames.

Alien trees around and on the upper campus are sure to have stoked the intensity of the fire. “Pines and gums can erupt when they catch alight, and are prone to fireballs in high winds,” said environmentalist Guy Preston, noting their embers had a cascading effect on UCT’s fire.

Instrumental in launching the Working on Fire (2003) and Working for Water (1995) programmes, Preston has played a major role nationally in driving the clearing of invasive plants.

“Another listed invasive, the ivy on the walls of the Jagger Reading Room at UCT is thought to have ignited from the embers, and acted as 'fire ladders' that led to the inferno,” said Preston.

“The [alien] palm trees on the campus and surrounding areas are particularly flammable, and they were likely to have been a cause of the damage.”

Preston, who retired as a deputy director-general from the national environment department last June, said the hot, low humidity, unusually dry and windy conditions in Cape Town were conducive to the wildfire spreading.

“What can turn a manageable fire into a runaway inferno, however, is the vegetation,” he said. “Invasive alien plants, like pines, gums and wattles, can burn at an intensity 10-fold or more that of the indigenous fynbos that they displace.”

They are “born to burn”, Preston explained, with species like pines and gums evolved to use fire and outcompete other species.

The encroachment of aliens has also fuelled more frequent fires than the cycles of about 15 years, in which indigenous fynbos would usually burn.

“Invasive vegetation is the single biggest threat for wildfires, to our water catchments, and to our rich biodiversity, plus having negative affects through flooding, erosion and loss of productive land.” 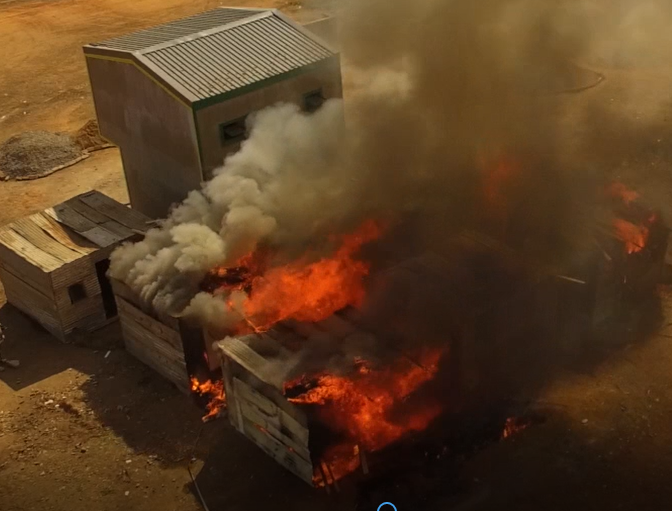 The massive dangers and losses from shack fires – from 2017/2018 more than 5000 informal dwellings burnt down - could be in future be prevented by using newly-invented and proven fireproof building materials, made out of alien trees, said invasive aliens expert Guy Preston. The tall structure and fireproof shack to the left were built out of it.
Image: Supplied

Working on Fire, a government-funded job creation programme, has trained and employed more than 6,000 people, including high-altitude teams, to extinguish fires and clear aliens.

As the Western Cape approaches winter, it will shift its aerial resources (30 aircraft) to the north and east of SA where the fire threat looms. WoF has more than 200 bases across SA.

Aliens intensify wildfires, as does global warming. This is the main reason the “number of high and extreme fire danger days and length of the fire season” is increasing, the report The Knysna Fires of 2017: Learning from This Disaster found.

The University of Stellenbosch, the CSIR and Santam wrote the report after the 2017 fires which killed seven people, displaced thousands and burnt more than 1,000 structures. Knysna, Preston notes, was “awash with invasive aliens” before this inferno.

Besides the destruction of biodiversity and property, fire causes immense trauma from grief and suffering.

During the big fires of the southern Cape in 1998, for example, four Working for Water participants were killed while trying to flee the fire. Nine others abandoned the vehicle and fled to a river. They survived, despite little water in the river because of the invasives, but their lungs were severely singed, said Preston.

Hot conditions and ready fuel intensify fires, but they don’t kindle them.

More than half the fires in the summer of 2019/20 on Table Mountain were connected to people lighting fires for “cooking, heat and social activity, according to the Cape Peninsula Fire Protection Association’s latest report.

About a third of the 58% were blamed on “malicious origins”, and on Sunday night a suspect was arrested for arson after a second fire was set above Vredehoek on the mountain.

The Table Mountain National Park had 108 fires in the summer of 2019/20, most on Table Mountain, and Lion’s Head and Signal Hill. More than 90% were extinguished in 90 minutes.

But it is a different story if the elements are hostile. If the Cape Doctor hadn’t stopped howling across city on Wednesday, Table Mountain could still be burning, despite organised and heroic efforts by dozens of firefighting crews.

Western Cape premier Alan Winde commended fire chief Arlene Wehr for her contribution to leading the city’s responses to the fire. Based at Cape Town’s central fire station in Roeland Street, Wehr is the first woman of colour to be one of four incident responders for the city’s fire and rescue services,

On her wall is a sheet of paper listing the wind speeds and temperatures for every hour — a reminder of what humans are up against.

By Thursday, the arrow on the “Fire Danger Rating” chart, in Newlands forest below the burnt-out slopes, pointed to “moderate” green after a drop in the wind and heat. Two Working on Fire choppers stood silent in a clearing.

“Our aim now is to make sure the fire does not spread,” said Philip Prins, the fire manager for Table Mountain National Park at its command centre there, drawing a red circle with spikes on the side, uncannily like a coronavirus shape. This showed how a perimeter gets set and their crews work to confine the smouldering hotspots and sparks within it. 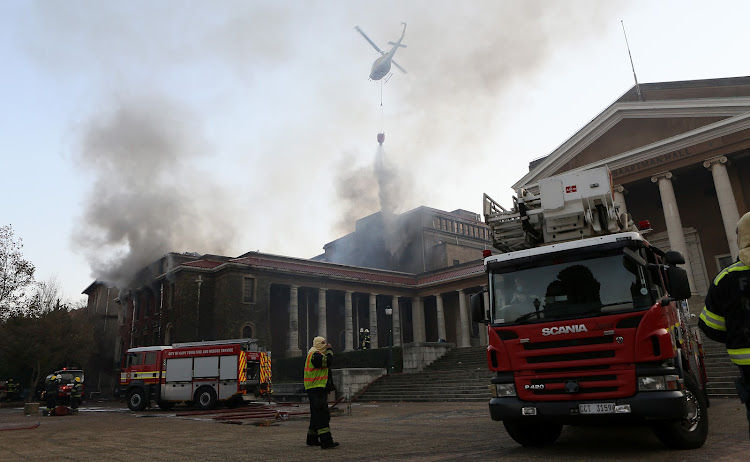 A helicopter water-bombs the fire near the Jagger Reading Room at the University of Cape Town.
Image: Ruvan Boshoff

Prins watches every fire front and co-ordinates the deployment on Table Mountain of the NCC Environmental Services contract crews — like the all-female Juliet crew who shot to fame this week — the Working on Fire crews and firefighters from the Volunteer Wildfire Services.

They often fan out on foot on mountain slopes, while the city’s firefighters work in pairs typically from fire engines.

Whoever they are, our firefighters are brave. Stifled by smoke and barely able to see through the gloom early on Monday with the fire above, the unpredictability of the wind and crackling flames was intimidating.

By lunchtime, it was possible to walk onto the shutdown freeway — earlier the fire had jumped five lanes of Philip Kgosana Drive, encroaching to within metres of homes in University Estate which residents helped protect — to observe firefighters at the front line.

The city insists that its fires and rescue services spokesperson, Jermaine Carelse, be the sole official spokesperson but one pair took a moment out to chat.

One of them — out of more than 200 deployed that day — was dousing flare-ups along the edge of the freeway with a hose. The other two with dark smudges on their faces rested briefly in their yellow-tinged goggles, helmets and heat-resistant suits as ash floated down.

A grizzled veteran said work was scarce under apartheid, so he applied to be a firefighter. His hand was damaged from injuries he got fighting a conflagration when a wall collapsed and he has fought flames “higher than this vehicle”.

“It’s not about being a hero but I’ve realised we can make a difference to people’s lives,” said the man, married with four children and six grandchildren.

“Our work is inherently dangerous but we try to do it safely,” he said. Risk reduction is why the 60-year-old plans to register for a Covid-19 vaccine as soon as he has a chance.

Meanwhile, dozens of pines have already sprung up on the green slopes of Lion’s Head amid the charred remnants of trees which burnt in the wildfire of January 2019.  Unless Capetonians act against these, and other, aliens, the next fire will burn even hotter — and that is true across SA.

“Despite government’s efforts to control invasive vegetation, it simply can’t be done by the government programmes alone,” said Preston.

“People have to take responsibility for clearing invasives from their property and fireproofing it,” says Preston who, with family and friends, has cleared some 15,000 pines from the mountain above their Hout Bay home in the past year.

By Friday, Carelse said that a few logs and hotspots were all that was left of the ferocious fire that lit up the mountain this week. The city had one crew out, WoF had 13 and NCC had 20 firefighters on duty, and another 15 out overnight.

Before the weekend began a divisional commander at the Roeland Street fire station, flanked by fire engines, gazed up at cirrus clouds high in the sky above Lion’s Head and said, longingly: “That looks like a northwester. It could bring us rain.”

Firefighters worked around the clock for four consecutive days to contain the fire, with no fatalities among its crew and community members.
News
9 months ago

UCT’s physical landscape is ruined, but digitisation has preserved history

A hard-copy collection of ecological photographs was destroyed, but foresight and decades of work saved it
News
9 months ago

The university's Jagger Library, which houses an African studies collection from the continent, is trending on Twitter as former students and ...
News
9 months ago