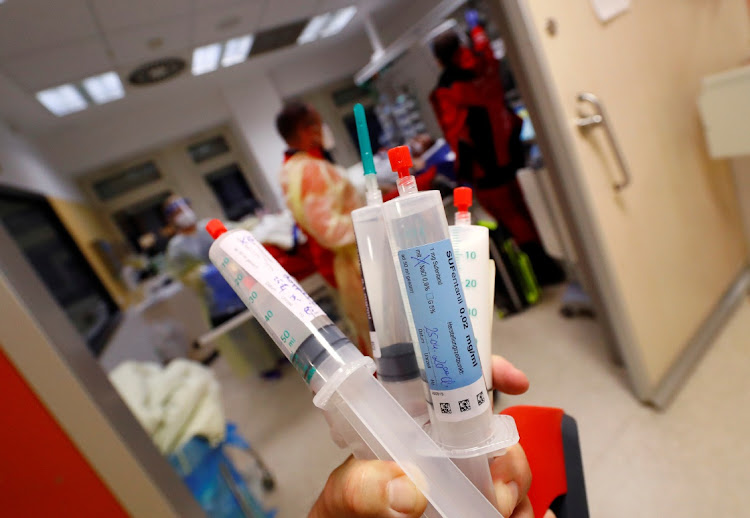 Health minister Zweli Mkhize said on Monday evening that there had been an additional 38 Covid-19 related deaths reported over the past 24-hours.

Broken down by province there were: Eastern Cape five, Free State five, Gauteng three, KwaZulu-Natal one, Limpopo five, Mpumalanga 0, North West 0, Northern Cape two and Western Cape 17, bringing the total number of deaths since the star of the pandemic in the country to 54.186.

As if today the cumulative number of #COVID19 cases identified in South Africa is 1 576 320. Today, 38 more COVID-19 related deaths have been reported which brings the total to 54 186 deaths.The cumulative recoveries now stand at 1 501 880, representing a recovery rate of 95%. pic.twitter.com/1zcES80vp6

The European Commission said on Monday it had launched legal action against AstraZeneca for not respecting its contract for the supply of Covid-19 vaccines and for not having a "reliable" plan to ensure timely deliveries.

AstraZeneca said in response that the legal action by the EU was without merit and pledged to defend itself strongly in court.

Under the contract, the Anglo-Swedish company had committed to making its "best reasonable efforts" to deliver 180 million vaccine doses to the EU in the second quarter of this year, for a total of 300 million in the period from December to June.

A bar in Copenhagen has started offering customers a Covid-19 test and a beer while they wait for the result to help get business moving again after months of restrictions.

Punters hand over about $25 (about R356) to get tested in a booth at Warpigs Brewpub. After about half an hour, if they get the all-clear, they are allowed inside.

It works under Denmark's “corona-passport” system where people can either use a mobile app or a government-approved form to show if they have been vaccinated, previously infected or have had a negative test in the past 72 hours.

Overjoyed Italians finally get to have their cappuccino sitting down in Rome as Covid-19 restrictions loosen.

Sanofi will fill and pack millions of Moderna Covid-19 vaccines from September in an effort to help meet the demand for the US drugmaker's shots, the French company said on Monday.

Sanofi said it would help supply up to 200 million doses of Moderna's vaccine at its Ridgefield facility in New Jersey. Financial details of the arrangement were not disclosed.

The deal marks Sanofi's third such agreement this year. In January, Sanofi pledged to help supply over 125 million doses of a Covid-19 vaccine made by Pfizer and BioNTech from this summer.

A month later, it said it would fill and finish vials of Johnson & Johnson's single-shot vaccine at a rate of approximately 12 million doses per month.

Sanofi said it was still working on developing two Covid-19 vaccines, one in partnership with Britain's GlaxoSmithkline for which it has started new clinical trials after disappointing early-stage results last year, and another with US company Translate Bio

Latin Americans, hard-hit by the coronavirus pandemic, are struggling to get vaccinated, a threat to the region's fragile economic recovery as lockdowns tighten amid a dangerous surge of infections and rising death tolls.

The region of some 660 million people has recorded almost 30% of the world's 3.2 million Covid-19 deaths to date, despite being home to just 8% of the world's population. While countries in Africa and Asia also lag behind Europe and North America on inoculations, health experts say Latin America's need for vaccines is the most urgent.

The scarcity comes down to a few factors: high income countries snapped up most of the available doses, and Latin American officials have cited difficulties sealing deals for their own people. A plan to manufacture the AstraZeneca vaccine locally has been hit by delays, and suppliers like Russia have faced their own hold-ups.

Meanwhile, the global COVAX program to supply vaccines to poorer countries has been bogged down by production glitches, a lack of support from wealthy nations, and a recent move by India, the biggest vaccine manufacturer, to curb exports.

With vaccine roll-outs lagging behind once ambitious plans, coronavirus cases have soared, with intensive care units from Argentina to Colombia filling up and death tolls hitting record highs."

There is a great sense of helplessness," said Elkin Gallego, whose wife was waiting for an ICU bed in Colombian capital Bogota, where health authorities say vaccine supplies are running out. "As a human you just can't do anything."

Colombia, which has a population of around 50 million, has so far distributed just over 4 million doses of Covid-19 vaccines, with some 1.3 million people fully inoculated.

The European Union plans to open its doors to Americans who have been vaccinated by this summer, according to European Commission President Ursula von der Leyen

Twitter withheld some tweets after a legal request by the Indian government, a company spokesperson told Reuters on Saturday. These included tweets from a lawmaker, a minister in the state of West Bengal, and a filmmaker.

“Suppression of information and criticism of government is not only dangerous for India but it is putting people around the world at risk,” said Mirza Saaib Beg, a lawyer whose tweets were among those withheld.

Israel's Health Ministry said on Sunday it is examining a small number of cases of heart inflammation in people who had received Pfizer's Covid-19 vaccine, though it has not yet drawn any conclusions.

Pfizer said it has not observed a higher rate of the condition than would normally be expected in the general population.

Ash said it was unclear whether this was unusually high and whether it was connected to the vaccine.

Most of the cases were reported among people up to age 30.

South Africans are cutting back on food, healthcare and data to survive

A survey conducted by gig technology company M4Jam among its temporary and short-term workers has found the cost of living for South Africans has become an issue that is as pressing as the country’s need for the Covid-19 vaccination rollout.

It shows that for those who either lost regular work as a result of lockdown restrictions and social distancing or cannot find work because of the economic devastation, rising costs are threatening their survival.

South Africans are cutting back on food, healthcare and data to...

A long delayed travel bubble between Hong Kong and Singapore will begin on May 26, the two cities said on Monday, as they moved to re-establish overseas travel links and lift the hurdle of quarantine for visiting foreigners.

A newspaper report that British Prime Minister Boris Johnson said that he would rather bodies piled “high in their thousands” than order a third lockdown is not true, defence secretary Ben Wallace said on Monday.

India's new coronavirus infections hit a record peak for a fifth day on Monday as countries including Britain, Germany and the US pledged to send urgent medical aid to help battle the crisis overwhelming its hospitals.

A research study in SA further evaluating Johnson & Johnson’s (J&J) Covid-19 vaccine in the field will resume on Wednesday, the health ministry said, after the study was paused over rare cases of blood clots in people who received the vaccine.

The US will immediately send raw materials for Covid-19 vaccines, medical equipment and protective gear to help India respond to a massive surge in coronavirus infections, President Joe Biden said.

The US Food and Drug Administration (FDA) had stopped AstraZeneca from using the facility earlier this month and halted production of Johnson & Johnson's vaccine at the plant as it began investigations into an error that led to millions of doses of J&J's vaccine being ruined last month.

However, Health Canada said it reviewed test results of all vaccine lots that came into the country and found them to be safe.J&J doses produced at the Baltimore, Maryland, site have not entered the country, the regulator said, adding that vaccines from the company anticipated to be imported next week were not made at that facility.

Germany will send oxygen, medical aid to India to help in Covid crisis

Germany will send oxygen and medical aid to India in the coming days to help it tackle its Covid-19 crisis, Foreign Minister Heiko Maas said on Monday.

India is suffering from a spike in coronavirus infections, with the number of cases surging by 349,691 in the past 24 hours, the fourth straight day of record peaks. Hospitals are turning away patients after running out of medical oxygen."

The second wave is currently rolling over India with unprecedented power. It was right that we acted quickly to stop the entry of the new mutation in Germany," Maas told the Rheinische Post newspaper.

Germany has classified India as a coronavirus high incidence area and also put the country on a separate warning list for coronavirus variants.

A long delayed travel bubble between Hong Kong and Singapore will begin on May 26, the two cities said on Monday, as they moved to re-establish overseas travel links and lift the hurdle of quarantine for visiting foreigners.

The bubble between the two Asian financial hubs had been slated to begin last November but was suspended after a spike in coronavirus cases in Hong Kong.

The scheme will start with one flight a day into each city, with up to 200 travellers on each flight, Hong Kong's Commerce Secretary Edward Yau and Singapore's Transport Minister Ong Ye Ku said at simultaneous press events.

Those wanting to travel from either city must test negative for Covid-19 before departure and on arrival. Hong Kong residents can also only fly to Singapore at least 14 days after they have had two doses of Covid-19 vaccine.

An outpouring of tributes for beloved book publisher Nadia Goetham are being shared after her family confirmed she died of a Covid-19 medical condition on Sunday.

The Oscars telecast on Sunday, stripped to its bare essentials by constraints of the Covid-19 pandemic, exhibited a look and feel like no others - devoid of the usual comedy and musical performances but chock full of lengthy oratory from the winners.

As the producers had promised, the 93rd annual Academy Awards ceremony marked a dramatic departure from televised Oscar presentations of the past, with no opening monologue, no live orchestra or any of the glitzy song-and-dance numbers that typically fill the show.

Performances of the five Oscar-nominated best original songs were relegated to pre-recorded presentations broadcast during a two-hour pre-show ahead of the main event on the Disney-owned ABC network.

What the three-hour broadcast lacked in music was more than made up for in talk, with presenters and winners alike given license to indulge their inner story tellers.

US taxi and limousine services are seeing a boom in business from customers seeking to enter Canada by land to avoid a restriction on international travel that applies only to air traffic.

While both Canadian land and air travellers are required to take a test within three days of departure, and again on arrival, only those flying to Canada must spend up to three days of the country's 14-day required quarantine period in a hotel.

That has led to a surge of calls for taxi and limousine services from Canadians who fly through U.S. airports in states like New York and then cross over the land border, representatives of four companies told Reuters."

They call from six in the morning to 12 at night," John Arnet, general manager of 716 Limousine in Buffalo, N.Y. said.

Overwhelmed hospitals in India begged for oxygen supplies as the country's coronavirus infections soared again overnight in a "tsunami" of disease.

Dr. Anthony Fauci addresses public concern surrounding a possible third-dose vaccine booster. Fauci tells CNN's Jim Acosta the need is not a matter of efficacy, but rather an extension of durability of protection against coronavirus.

Fareed on Johnson & Johnson vaccine pause: The damage has been done

CNN's Fareed Zakaria discusses the CDC and FDA's recommendation to pause and then quickly resume the use of the Johnson & Johnson coronavirus vaccine, which has been linked to 15 cases of a rare blood clotting condition.