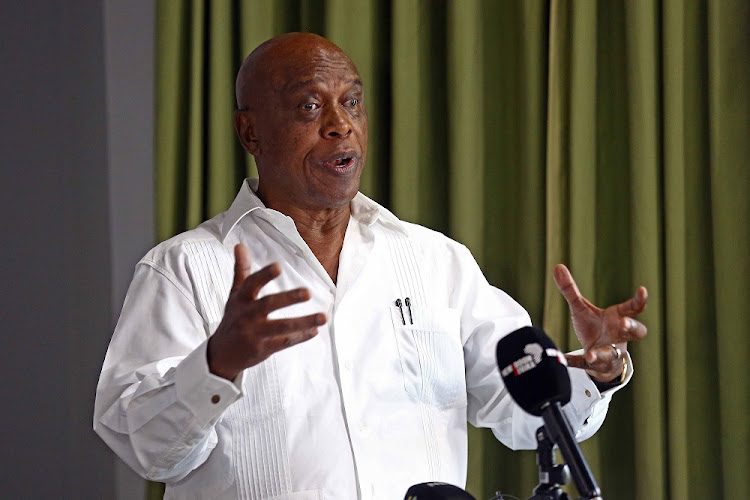 Without mentioning names, the Hawks said on Monday that they are investigating claims by a complainant that R41 quadrillion was stolen in SA. The claims echo those brought to the fore by Tokyo Sexwale, pictured.
Image: Thapelo Morebudi/The Sunday Times

The Directorate for Priority Crime Investigation (DPCI) confirmed on Monday that it was investigating two cases reported at the Sandton police station involving the alleged theft of a colossal R41 quadrillion.

The claims echo those brought to the fore by senior ANC official Tokyo Sexwale, who last week made a public announcement revealing how a large sum of money had been “stolen”  from the Reserve Bank and that he had documents to substantiate the allegations.

The Hawks did not name Sexwale in their statement on Monday as the complainant in the matter.

Hawks spokesperson Col Katlego Mogale said the first case was reported on March 13 while the second was reported on April 13 — preceded by a media statement and “photos of the complainant carrying copies of the files”.

Outlining details of the first case, Mogale said the complainant stated that he was appointed as a forensic investigator on May 6 2013 by the presidency.

“In support of his appointment, a two-page document signed by the erstwhile employee of the department of public service & administration (DPSA) was attached as part of the 101-page document. The purported authority include documents titled Power of Attorney signed by numerous representatives of tribal authorities. In this case, the complainant reports theft of gold worth one hundred and sixty three trillion rand only (R163,000,000, 000,000) which was recorded between 1966 and 2021. The DPSA indicated that its former employee did not have authority to sign the letter, which is now used by the complainant.”

In the second case, the same complainant said he was appointed by the presidency through the DPSA on May 6 2013. He reported, in a 213-page document, allegations of money laundering, fraud, theft under false pretence, high treason and racketeering. The amount lost was recorded as forty one quadrillion three hundred and thirteen billion one hundred and four million rand only (R41 380 513 104 000 000).

“The theft includes the alleged monies stolen from former [Libyan] leader [Muammar]  Gaddafi which was investigated and found to be untrue.”

Mogale said the Hawks were systematically searching for the truth in both matters.

She said the national head of the Hawks, Lt-Gen Godfray Lebeya, had personally perused the files and directed closer collaboration on investigation of four matters that required similar attention.

“They shall be working closely with the prosecutors that handled these allegations in the past. The Hawks shall leave no stone unturned before reaching any conclusion on these matters.”

Mampara of the week: Tokyo Sexwale

Tokyo Sexwale has lived a colourful life. A young activist imprisoned on Robben Island alongside Nelson Mandela, he came out to become an important ...
Opinion & Analysis
1 year ago

It would seem businessman Tokyo Sexwale fell victim to an obvious scam.
Opinion & Analysis
1 year ago

Tokyo Sexwale: a scam or a smear?

While many have dismissed businessman Tokyo Sexwale's claims of the theft of billions intended for SA's upliftment as unhinged, deputy minister of ...
News
1 year ago