'Coka brothers not only ones killed at the farm'

There’s blood in that farm and it needs justice, cop tells bail hearing 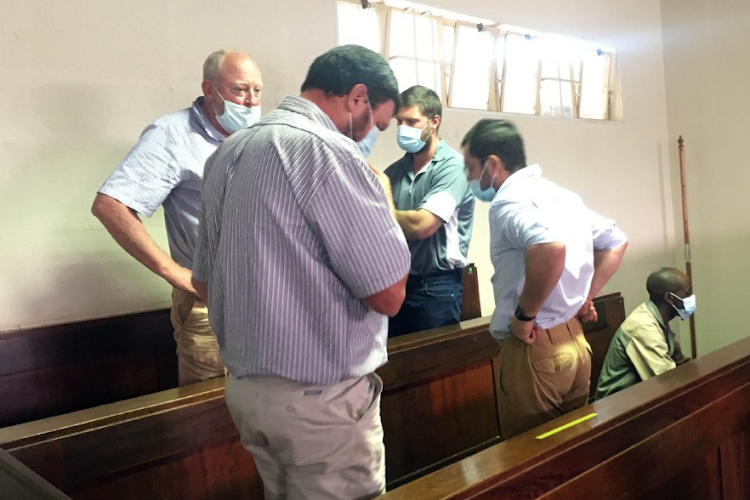 The accused in the Coka murder case.
Image: Mandla Khoza

The investigating officer in the Coka brothers' murder case has told the Piet Retief magistrate's court that another double murder happened at the same farm where the siblings were killed.

W/O Vukile Nhlapho continued with her testimony in the bail application of the five accused on Wednesday, saying the other murders were committed at the farm Bampoen in Piet Retief, Mpumalanga, in August.

The officer said three victims were allegedly beaten up, leading to the death of two of them. The other one played dead and lived to tell the tale. “I want this court to know that there’s blood in that farm and it needs justice,” said Nhlapho.

The four farmers accused in the Coka case — Daniel Malan, 38, Cornelius Greyling, 26, Othard Clingberg, 58, and Michael Sternberg, 31 — were arrested on April 9 and have been in custody since then, while Zenzele Patrick Yende, 48, was nabbed on April 15.

The four men implicated in the murder of two alleged job seekers in the Mkhondo area near Piet Retief appeared in the local magistrate’s court on ...
News
1 year ago

Three in court for murder of Hartbeespoort farm security guard

Three men who allegedly murdered a security guard during a robbery at a farm near Hartbeespoort Dam have appeared in the Brits magistrate’s court.
News
1 year ago

Police have arrested five people in connection with the murder of a 55-year-old KwaZulu-Natal farmer who was brutally stabbed at his farm on Friday.
News
1 year ago