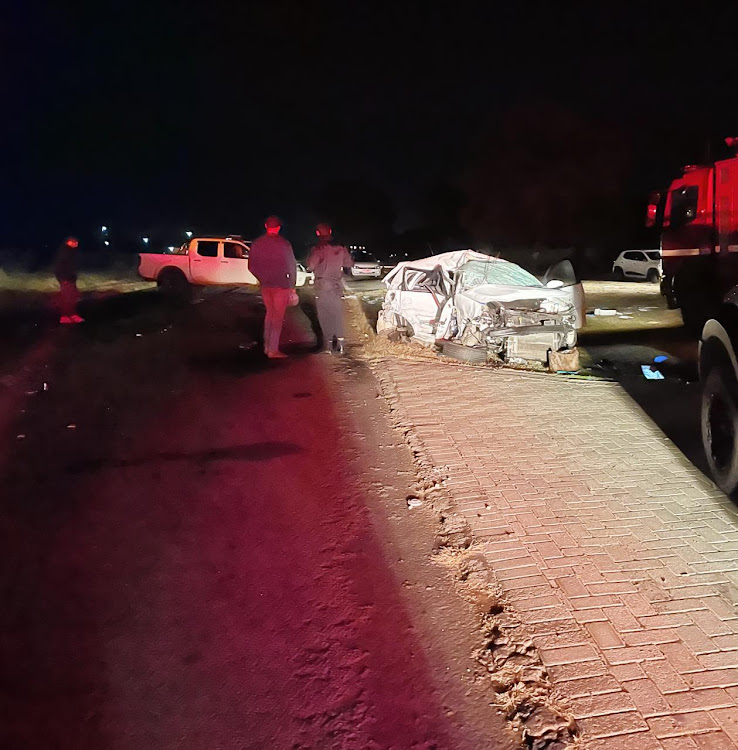 A 22-year-old woman was killed in a collision between a Polo and a RAV4 on Ravel Road, Vanderbijlpark last night.
Image: ER24

A cyclist was among those killed in accidents in the Vaal Triangle at the weekend.

In the latest incident, a 22-year-old woman was killed in a collision between a Polo and a RAV4 on Ravel Road, Vanderbijlpark, just after midnight on Sunday.

Two others, a 30-year-old man and a woman, suffered minor injuries in the accident, ER24 said in a statement.

It said paramedics were on the scene just after midnight with the fire department and police.

“The 22-year-old female was found partially entrapped in the wreck of the Polo, showing no signs of life. Unfortunately, nothing could be done for her and she was declared dead on arrival.

“The 30-year-old man and the adult female from the RAV4 were both found to have suffered minor injuries. The male patient was treated by ER24 and transported to Mediclinic Emfuleni for further care. The female was found still in the vehicle and was immobilised prior to being treated on scene and transported by the other private EMS service on scene, also to Mediclinic Emfuleni.”

In the earlier incident, a man believed to be in his late 20s or early 30s, was killed when he was knocked off his bicycle by a light motor vehicle on the R42, at Veld and Vlei outside Three Rivers.

“ER24 paramedics were on the scene at 8.03pm last night along with the provincial emergency medical services. The man was found lying prone in the street showing no signs of life. Unfortunately nothing could be done for him and he was declared dead on arrival. GPG assessed the driver of the vehicle — an adult male with unknown injuries.”

The SA Police Service was at the scene for investigations and handover.

Three pedestrians were killed - two of them as they tried to move a dead cow out the way - in two separate road accidents in Osidisweni, near ...
News
1 year ago

Kim McCusker, who was dragged under a taxi, dies ‘after 10 years of pain’

McCusker, who qualified as an advocate, was severely injured in an altercation with a taxi driver in Lonehill on September 13 2011.
News
1 year ago

A child and three adults died in a "serious crash" on the N11 between Ladysmith and Newcastle in northern KwaZulu-Natal on Sunday.
News
1 year ago

A horrific crash on the N2 highway in KwaZulu-Natal on Friday has left one motorist dead and a family of three critically injured.
News
1 year ago