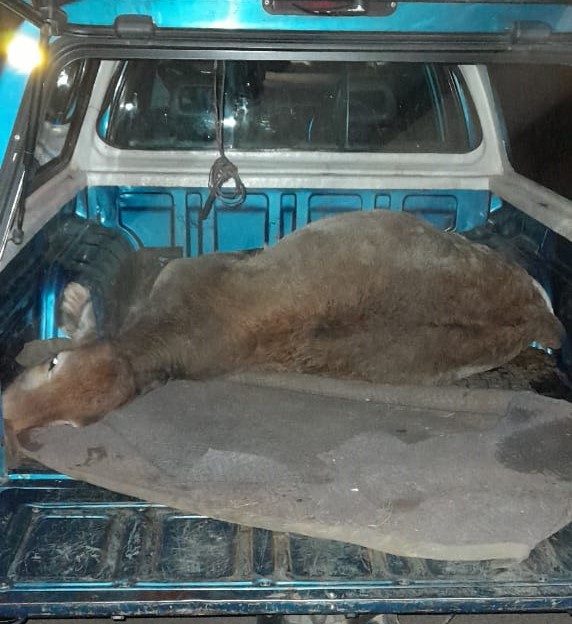 A stolen cow was crammed into the back of a bakkie. The animal was stolen from a farm in Hlobane, northern KZN, and recovered by police on Sunday night.
Image: SAPS

Police in northern KwaZulu-Natal arrested five men on Sunday in two separate incidents in which a stolen cow and cellphone tower batteries were recovered.

In the first incident two men were arrested after being caught by Vryheid police transporting cellphone tower batteries that were stolen in Nongoma earlier that day.

Police spokesperson Col Thembeka Mbele said the batteries, estimated to be worth R1.2m, were being transported in a taxi.

#sapsKZN Trio aged between 20 and 40 were arrested during a stop and search along the R34 near Vryheid on charges of possession of stolen property as well as possession of house breaking implements. Cellphone tower batteries recovered. #TrioCrimes MEhttps://t.co/yq8RlNUtzf pic.twitter.com/4UczPes3dO

“Vryheid police received intelligence on Sunday morning about a taxi that was transporting stolen cellphone tower batteries. An operation was put in place and various role players from the SAPS proceeded to Vryheid. The vehicle was spotted travelling along the R34 and it was intercepted.”

Upon searching the vehicle, eight cellphone tower batteries were recovered.

“Three suspects aged between 20 and 40 were placed under arrest on charges of possession of stolen property as well as possession of house breaking implements. The suspects are appearing before the Vryheid magistrate's court on Monday.”

Mbele said later that evening members of the Zululand Task Team, together with local farmers, followed up on information about stock thieves operating at Vryheid and Hlobane using several vehicles.

“A suspicious bakkie with two occupants was spotted along Hlobane Road next to Vaalbank. The vehicle was stopped and, upon searching the vehicle, police found a heifer loaded at the back of the bakkie. The investigation was conducted and it was established that the cow was stolen at a farm in Hlobane.”

She said the stolen animal was identified by the lawful owner.

“Two suspects aged 43 and 54 were placed under arrest for possession of stolen stock. They are appearing before the Hlobane magistrate's court.”

Three pedestrians were killed - two of them as they tried to move a dead cow out the way - in two separate road accidents in Osidisweni, near ...
News
1 year ago

Minister of co-operative governance and traditional affairs Nkosazana Dlamini-Zuma and members of the KZN provincial government visited ...
Politics
1 year ago

A KwaZulu-Natal man has made a court appearance in connection with the alleged rape of his 89-year-old grandmother.
News
1 year ago