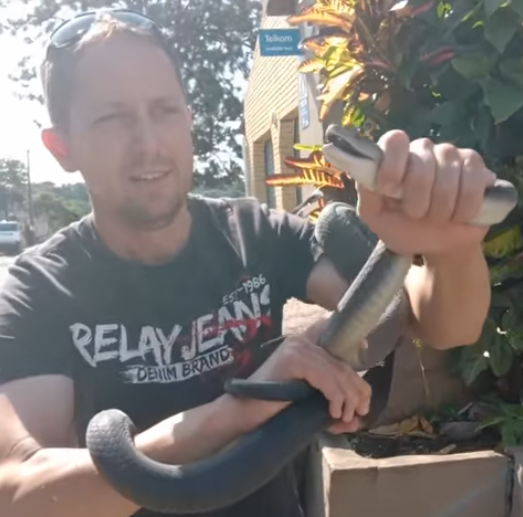 The snake was captured during a viral Facebook LIVE which left many scared for their safety but grateful he arrived on time to capture the 2.8m snake.

Gasps from shocked residents can be heard in the background while he captures it.

“It’s another boy. This is the third boy coming out of here so there has to be a female around here. They can smell her. It is mating season for black mambas and they want to live with her so that as soon as the mating season starts they are already there.

“I can only assume it is a girl attracting all these boys because there is no other reason,” Jason said.

He said there seems to be a lot to black mamba “activity”.

The process was not without threat as the snake had its mouth open because black mambas are always “ready to bite”, according to Jason. It was also “frustrated” while he captured it.

He said the female snake has not been captured.

He put the snake in a plastic bag and safely transferred him to the wild. Watch the video below:

Tens of thousands of ‘virtual rangers’ worldwide are helping South Africa’s all female anti-poaching unit known as the 'Black Mambas' keep an eye on ...
News
1 month ago

‘It could have ended badly’: How 2.2m black mamba was captured in teen’s bedroom

Durban based snake rescuer Nick Evans says a call made by a teenager saved the child’s life and that of a 2.2m black mamba.
News
1 month ago

A monster 2.7m female black mamba was safely captured at a truck yard in Verulam, north of Durban, on Sunday.
News
3 months ago
Next Article