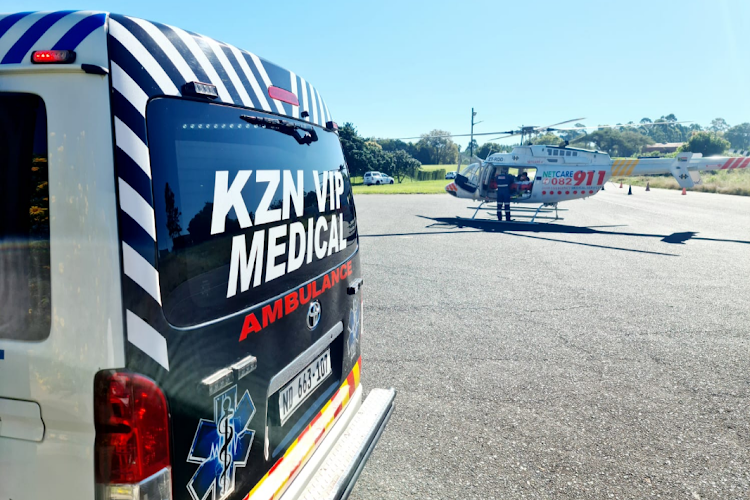 Paramedics from KZN VIP and Netcare 911 attended to a man who sustained critical injuries after being shot in the chest in Marianhill, west of Durban, on Tuesday.
Image: ALS Paramedics

A 30 year-old KwaZulu-Natal taxi driver is in a critical condition after he was shot in the chest in Marianhill, west of Durban, on Tuesday.

“It is alleged a taxi with three people inside was travelling on Old Richmond Road in Mariannhill when they were jammed by an unknown taxi. One of the males in the unknown taxi alighted and fired a shot at the driver. They forced the other two occupants out of the taxi and fled the scene with the complainant’s taxi.”

Jamieson said the man was stabilised on the scene by ALS paramedics before the Netcare 911 aero-medical service helicopter was called in to airlift him to Lenmed Ethekwini Hospital and Heart Centre for further care.

Police are investigating a case of carjacking and attempted murder.

IN PICS | Seven dead, N3 closed in both directions after fiery N3 pile-up

Seven people have been confirmed dead in a horror crash on the N3 highway.
News
1 year ago

Firefighters in Durban are battling a raging blaze which broke out at a textile and screen printing factory on Felix Dlamini Road (formerly ...
News
1 year ago

Six gunmen who attempted to rob a butchery in northern KwaZulu-Natal and a bystander were killed in a shoot-out with police on Friday night.
News
1 year ago