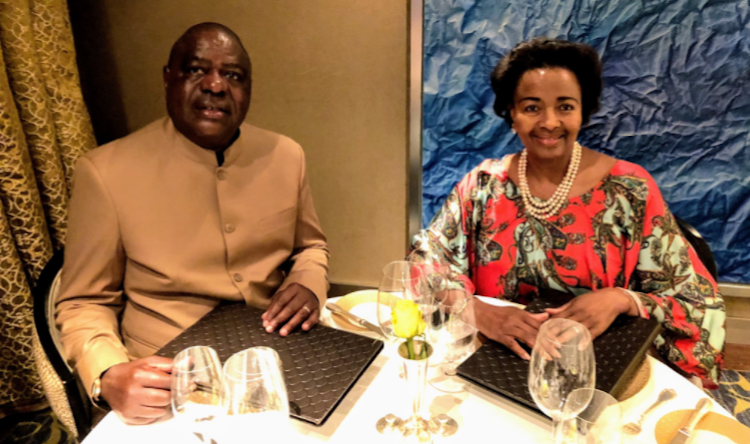 The TL was filled with good vibes after former Gauteng premier Mbhazima Shilowa posted a cute post to his wife Wendy, gushing over and detailing their love story.

Shilowa posted several pictures of himself with his missus and explained that they first met in an airport 28 years ago but he was too scared to take his shot.

“I bumped into her at Lanseria airport in 1993. Turned out we were going to the same destiny: Ngala lodge. I got cold feet, even as the heart said 'please, sir'.”

The pair met again twice more before Shilowa finally summoned up the courage to ask her out.

“We met again in Jozi at a conference. Then at, Madiba’s inauguration, I asked her out for dinner.

Bumped into her at Lanseria airport in 1993. Turned out we were going to the same destiny - Ngala lodge. Got cold fit even as the heart said please sir. Met again in Jozi at a conference. Then at Madiba’s inauguration, asked her out for dinner. We went out on 29/05. Shot my shot pic.twitter.com/mxm1hORrLG

Wendy responded, calling it a date with destiny.

“Turned out to be an appointment with destiny. Who proposes at a first date?” she asked, with a blushing giggling emoji.

Former public protector Thuli Madonsela responded to the post, congratulating the couple and wishing them many more blessings.

Congratulations to both of you. Stay blessed 🌹🌹🌹🌹🌹

Mbhazima Shilowa ‘baffled’ by those expecting Ace to step aside: ‘Why do people like watching paint dry?’

"I wonder if my party is ready for the local government elections. Looks like there is going to be gnashing of teeth," says former Gauteng premier ...
Politics
2 months ago

Former Gauteng premier Mbhazima Shilowa asked who in their right mind would celebrate the burning of the institution which housed stories about “our ...
News
2 months ago