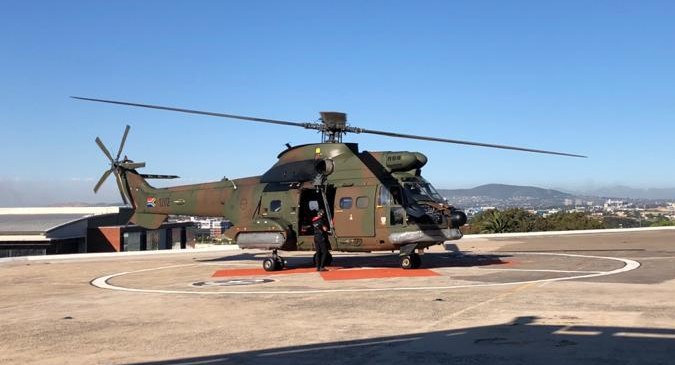 Hoedspruit Air Force Base is the home of 19 Squadron. The air force Oryx, pictured, operates from this base. File photo.
Image: National Sea Rescue Institute

Thieves managed to breach security at a SA Air Force base and break into an office at the weekend.

Hoedspruit Air Force Base, on the border of the Kruger National Park near Mozambique, is home to 19 Squadron, a helicopter unit.

SA National Defence Force (SANDF) spokesperson Brig-Gen Mafi Mgobozi confirmed the incident but did not provide details, other than to confirm the break-in occurred at the finance office at the base.

The break-in allegedly occurred on Sunday evening and an angle-grinder was used. Cash and other valuables were reportedly taken.

Hoedspruit is a modern fighter base, formerly known as “Fighter Town” when the Mirage F1 and Mirage III French fighter jets were based there. It is now home to A109 LUH and Oryx helicopters.

“The SANDF would like to reiterate that all or any acts of criminality will not be tolerated. Perpetrators will face the full might of the law,” said Mgobozi.

TimesLIVE has reached out to the police for more details about the break-in.

An assault rifle identified as SANDF property and a shotgun registered to a late estate, were among the weapons found after a suspect was arrested ...
News
1 year ago

Military doctors were right: WhatsApp is not right for orders to deploy

A military court has exonerated 12 medical members who refused to be deployed on a Covid-19 operation in 2020.
News
1 year ago