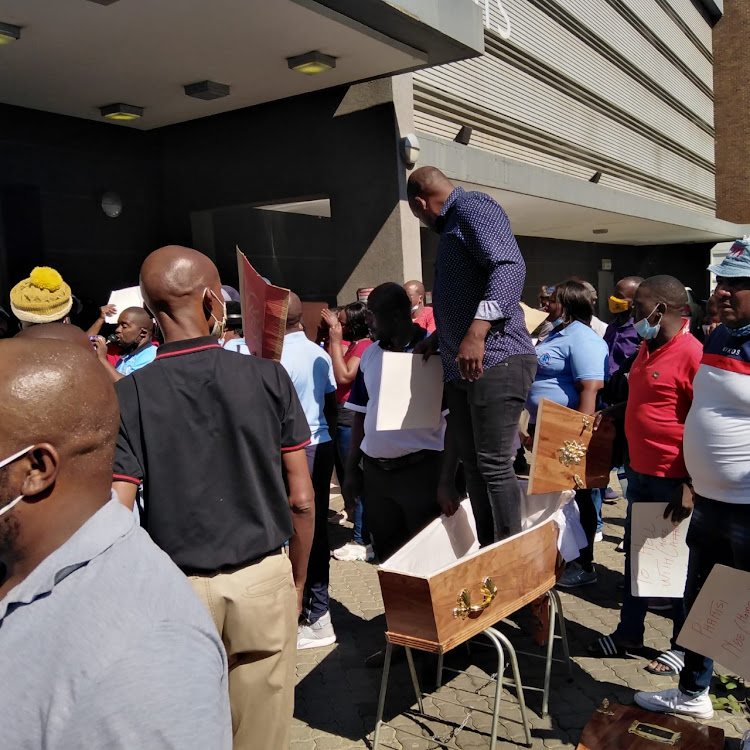 Funeral parlours, under the banner of the Unification Task Team (UTT), protest outside the home affairs department in Tshwane on May 11 2021.
Image: Veli Nhlapo

Aggrieved Gauteng funeral parlours say they will intensify their protest from Tuesday and “shut down” all home affairs offices across SA until their complaints over the department’s regulations are addressed.

The companies, under the banner of the Unification Task Team (UTT), want the department to amend regulations so they have the right to remove bodies from mortuaries, hospitals and forensic laboratories for burial.

At issue are certificates of competence (COCs), which allow funeral parlours to obtain death certificates on behalf of bereaved families. Without the certificates they cannot complete the death registrations, which means that families have to delay burying their loved ones, or queue on their own at home affairs offices to apply for the documentation.

On Tuesday, members of the UTT closed down the home affairs department's head office in Pretoria.

Funeral parlours in Gauteng plan to "shut down" the home affairs head office in Pretoria on Tuesday over complaints that requirements for the removal ...
News
1 year ago

UTT spokesperson Muzi Hlengwa told TimesLIVE that they were protesting peacefully until the police fired stun grenades at them.

“Everything was going very well. We were having a peaceful protest, but all of a sudden a policeman started shooting at us and others joined in. That was the first round.

“In the second round, I and a police captain were controlling the crowd and the police started shooting again and threw grenades at us,” Hlengwa said.

“I am really disappointed at the attitude of the police. We were harmless and we were not blocking anything.”

He said undertakers had held a meeting with home affairs officials before the protest turned violent, but they could not reach an agreement.

“As from tomorrow, we are shutting all home affairs departments nationwide.”

Tshwane metro police spokesperson Sen-Supt Isaac Mahamba said two people were arrested during the protest. “One was arrested for public violence and the other for possession of an unlicensed firearm,” he said.

“We heard about people being injured on the scene and urge them to report such injuries formally to authorities.”

He dismissed Hlengwa’s claim that they were protesting peacefully.

“They were blocking the streets with stones and objects, and some even used coffins to close the streets. That won't be allowed, hence police used rubber bullets.”

They can't bury, cremate bodies without certificate of competence.
News
1 year ago

A national task team of undertakers has threatened to shut down home affairs branches nationwide as part of their final push to force the department ...
News
1 year ago

Three funeral parlours have refunded grieving families who complained that they were charged exorbitant “handling fees” when their loved ones ...
News
1 year ago