WATCH | Chaos, confusion and no social distancing as health workers queue in vain for Covid-19 vaccines 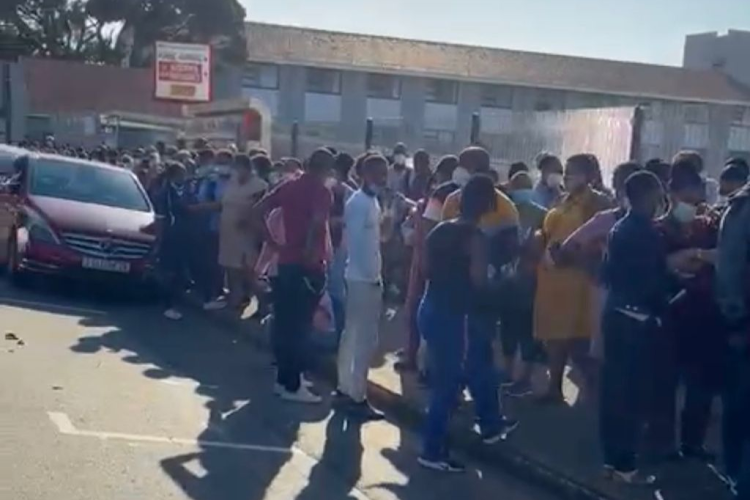 Scores of healthcare workers queue outside St Augustine's Hospital in Durban on Thursday for their vaccination.
Image: SUPPLIED

Chaotic scenes played out at some hospitals around the country on Thursday when hundreds of healthcare workers caused traffic jams when gathering to receive their Covid-19 vaccination.

The police had to turn away scores of people from at least one hospital because they  did not meet the criteria to be vaccinated in the Sisonke Johnson & Johnson trial.

There has been an influx of people, fuelled by misleading information shared on social media, attempting to get the jab by “gaming the system” used to register.

At at least two hospital sites, “misinformation” was blamed for the chaos.

“At Netcare St Augustine’s Hospital, unfortunately a bottleneck of people queuing outside has resulted, fuelled by these incorrect messages,” he said. “Inside our premises, at the vaccination facilities, we are maintaining social distancing with markings on the ground and chairs carefully distanced, but areas outside our hospital grounds are unfortunately beyond our control.

“The police have repeatedly told people gathering outside and who do not have an appointment to leave, and ordered those queuing to respect social distancing guidelines, but to little avail.”

At Netcare Milpark Hospital in Johannesburg, traffic was backed up as healthcare workers waited in their cars to get to the vaccination site. 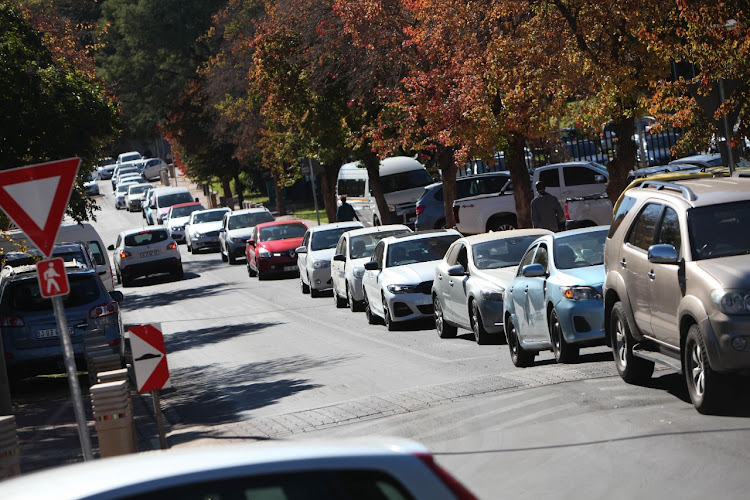 Cars sit in heavy traffic around Milpark Hospital in Johannesburg on Thursday. Traffic around the hospital was abnormally busy as healthcare workers queued for the Covid-19 vaccine.
Image: Alaister Russel

The South African Medical Research Council (SAMRC) on Thursday disputed information being shared online claiming hospitals had extended the Sisonke trial to the public because of impending expiry of the vaccines.

“The vaccines are not expiring as they have a year before expiry. In the fridge they last for 28 days and at room temperature, four hours. On Friday we expanded our definition of a healthcare worker to include people who work in funeral parlours, undertakers, and non-patient-facing healthcare workers who work in the field.

The confusion came amid fiery debate on the vetting process of the rollout after a video posted on Twitter by a technology and motoring journalist who wrote: “I got the vaccine.”

Dr Keith Cloete, head of health in the Western Cape, explained on Thursday that the Sisonke programme had “widened its criteria” for eligibility but it still applied only to those in the health sector. The vaccine is being rolled out to people over the age of 60 from Monday.

“Nobody should be jumping the queue. We should all be adhering to rules, people must wait their turn,” he added.

In Durban, Fikile Mhlongo told TimesLIVE that she spent Wednesday night dreaming that she would get vaccinated on Thursday morning.

Mhlongo was one of hundreds of health workers outside St Augustine's Hospital.

When she arrived she was told to join the queue, which was apparently more than a kilometre long, and await further instructions.

“I had my voucher which proved my registration, but then we started hearing about appointments and dates, something that wasn't on our registration. We are waiting here but unsure if we will get help. We have not eaten and cannot leave our places in the queue.”

'Nobody should be jumping the queue. We should all be adhering to rules, people must wait their turn.'
News
6 months ago

Thokozani Zuma and his colleagues made the trip from Shelly Beach on the south coast on Thursday morning in an attempt to arrive at St Augustine’s hospital before 5am.

He too received a message notification early on Thursday morning informing him that he would receive his vaccination at the Durban hospital.

“We were surprised to see such a long queue, even though we weren't that late. Some workers have been here since before 5am and have not been assisted yet. When we got here we heard for the first time that elderly people had also been called to come and get vaccinated.”

Du Plessis said St Augustine’s and Milpark hospitals continued to vaccinate only eligible healthcare workers who have registered to receive their Covid-19 vaccinations and who have been pre-booked for vaccination today and tomorrow.

It is of vital importance that the process is properly followed. Only those who arrive with the correct documentation will be able to receive a vaccine.

“While both hospitals have been set up to vaccinate a high number of healthcare workers, there are no additional vaccination slots available and we are therefore unable to vaccinate any walk-ins. We strongly urge individuals without appointments not to come to either of these facilities and endanger themselves by arriving en masse,” said Du Plessis.

“As the Sisonke programme, which is focused on the vaccination of healthcare workers, comes to a close, we are seeing an influx of people arriving to be vaccinated. This has not been helped by the misinformation being circulated.”

He said there was no shortage of healthcare workers wishing to be vaccinated. “And we are working efficiently and carefully, doing our utmost to ensure the safety of everyone. However, the challenge is that many people are arriving without vouchers. To ensure minimum delay, we would like to remind everyone to bring along all the necessary paperwork, including proof of employment and identity document or passport.” 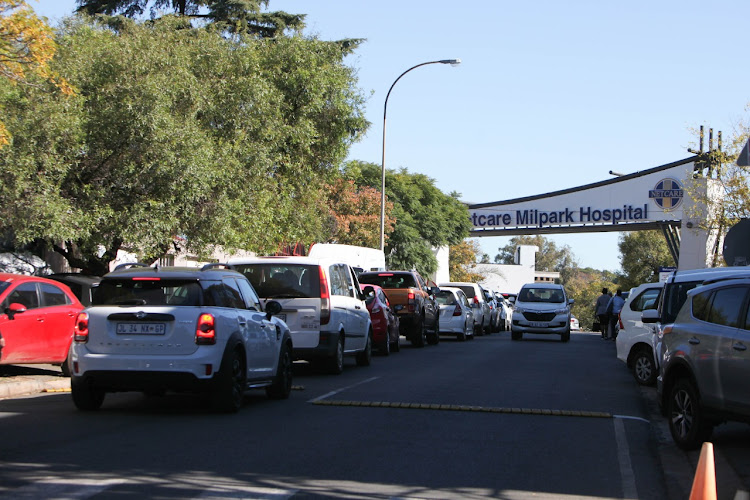 Heavy traffic around Milpark Hospital in Johannesburg on Thursday. Traffic around the hospital was abnormally busy as healthcare workers queue to get their vaccines.
Image: Alaister Russel

He said the verification and registration process could take time, particularly with so many individuals arriving without vouchers.

“It is of vital importance that the process is properly followed. Only those who arrive with the correct documentation will be able to receive a vaccine.”

The Gauteng department of health said on Thursday it was aware of the “overwhelming demand for vaccines at various vaccination sites by healthcare workers” and appealed for calm.

“Health workers who have not been vaccinated at the end of the Sisonke programme will get the opportunity to receive the vaccine under the Phase 1b vaccine rollout, which is commencing next week.

“The available vaccine stock under the Sisonke early access programme is only sufficient to accommodate people who have already been issued with vouchers and appointments.”

The department said the SAMRC was working towards a “smooth handover” as the Sisonke programme comes to an end this week.

Meanwhile, the National Education, Health and Allied Workers' Union (Nehawu) called on the government to prioritise healthcare workers, after nurses called to vaccinate were turned back on Wednesday and Thursday at the Charlotte Maxeke Hospital.

General secretary Mzikayise Tshontshi said healthcare workers who wanted to get vaccinated were turned back, having been told that there was a shortage of vaccines.

“We learnt of an unfortunate situation where workers, nurses in particular, were invited to come and get a vaccine and were turned away because the hospital didn’t have sufficient vaccines. And they say this started yesterday. Today people were asked to come and, again, they were turned away,” said Tshontshi.

Tshontshi said it was unacceptable, considering that the country was on the verge of a third wave.

“It is unfortunate that the department of health is not taking the issue of vaccinating workers as seriously as they ought to. From our standpoint if they took this thing seriously, they wouldn’t be miscommunicating as they are doing right now,” he said.

He said the problem was the shortage of vaccines and they were not aware of individuals jumping the queue to be vaccinated at the hospital.

“Healthcare workers are a critical component of the delivery of these vaccines and they should be prioritised,” he said.

The DA expressed concern over the chaos at the hospitals.

Party MPL and Gauteng shadow health MEC Jack Bloom said health workers were turned away despite being notified that they could get the J&J jab.

“Early this week the SA Medical Research Council stated that 'due to high demand at many sites we can only accept health workers and personnel with vouchers'. But many health workers have arrived with vouchers and are told to come back, and then another excuse is given for why they cannot get the vaccination,” Bloom said.

A SAMRC report says the excess death rate per 100,000 population for SA was 258 over the past 12 months. This places the country in the top five ...
News
6 months ago

There were 2,759 new Covid-19 cases recorded across SA in the past 24 hours, taking the total number of infections since the coronavirus outbreak ...
News
6 months ago

Sisonke teams across the country are working flat-out to meet their target of vaccinating 500,000 healthcare workers by the end of this week.
News
6 months ago