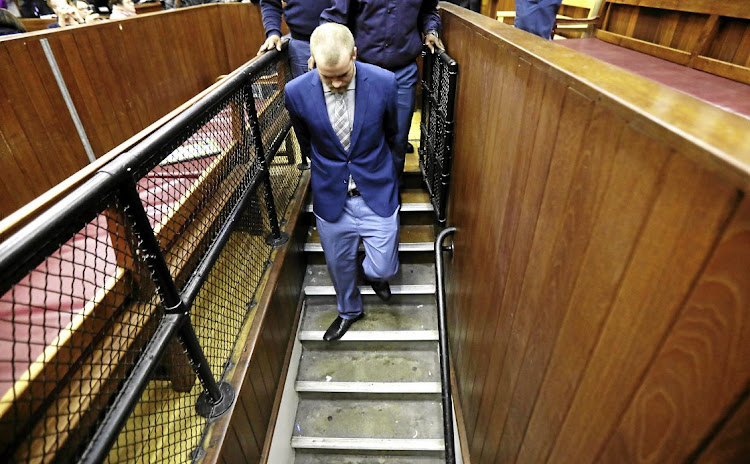 Henri van Breda descends to the cells below the high court in Cape Town after being convicted of the murders of his parents and brother and the attempted murder of his sister. File photo.
Image: Esa Alexander

In our first exploration of the Van Breda family murders, Martin, Teresa, and Rudi van Breda succumbed to the injuries inflicted on them by an axe-wielding attacker. Marli, barely clinging to life, was rushed to Stellenbosch Mediclinic for lifesaving treatment.

Henri van Breda, 20, had sustained superficial injuries to his arms, torso and abdomen, and relayed to police that he and his family were attacked by an intruder.

In Part 2, True Crime South Africa will delve into the probability of this claim. Much had been made of the likelihood of anyone being able to successfully breach the perimeter of the De Zalze estate, but few seem to have considered there were already hundreds of people inside that perimeter that morning because they lived there.

In part 1 of our episode on the Van Breda family murders, 'True Crime South Africa' looks at the family’s background, some of the alleged events of ...
News
5 months ago

PODCAST | The Profiler Diaries: from the case files of a police psychologist

We have finally been given a glimpse into the background, career development and experiences of a man who would be instrumental in apprehending some ...
News
5 months ago

PODCAST | Officer down: the murder of Leslie Cilliers

On July 23 2003, inspector Leslie Cilliers pulled over a vehicle containing eight bank robbers. Within seconds, the hardworking and dedicated police ...
News
6 months ago