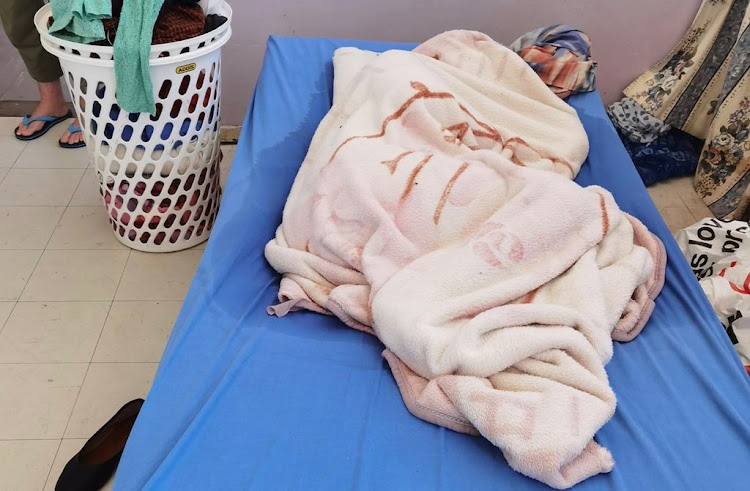 A resident lies in a urine-soaked bed at the Durban and Coastal Mental Health's Sherwood residence. Management have acknowledged that some service providers are unhappy.
Image: Supplied

Residents at Durban and Coastal Mental Health’s Sherwood residential facility were facing starvation this week when the catering company servicing the facility apparently walked off site, locking fridges and cupboards.

A relative of one of the residents, who received a desperate call, had to single-handedly take over the kitchen and, with donated food and supplies, feed the 80 residents three meals a day plus teas.

Local businesswomen Liesel Muhl said she heard about the crisis and visited the facility this week. “My gosh, I wanted to cry,” she told TimesLIVE.

“There were nurses there but they were sitting together in what appeared to be a dining room. The residents were milling about. Some were lying on urine-stained beds.

“One resident, who is more able than others, was trying to fix the plumbing. The geyser had burst. In some bathrooms there is no water, in others there is no hot water. It is dire.”

Cremations at the Mobeni Heights Crematorium in Durban had to be suspended again because the high number of Covid-19 deaths had exhausted the ...
News
1 year ago

Muhl said she has rallied local businesses to get involved.

“We have managed to get enough food for a few days. We are getting plumbers and roofers to come round. We are trying to put out the immediate fires and then get to the bottom of the root cause of them.”

Another relative, Anthony Murphy, said the hiring and firing of contractors by DCMH “was like a revolving door”.

On Monday, he said, the chief service provider who serviced all the residences, not just Sherwood, had “walked out” and there was no backup plan.

Sunday Times Daily reported in November last year that a mental healthcare patient crisis was looming because the non-profit organisation, which interfaces with more than 600,000 mentally ill people in the province every year, was teetering on the brink of bankruptcy.

Although the department continues with the funding of this institution, with over R13m annually, it seems that the money is not used correctly.

At the time it was already R6m in the red, was being sued for about R2.4m by a  service provider, and regular donors, including Ubuntu Community Chest, had withdrawn funding because of concerns with the state of the balance sheet.

A new board had been operating for about a year, chaired by attorney Sipho Shezi. He put much of the blame for the financial woes on the previous board.

But he told TimesLIVE this week he had resigned as chairperson in March and this week had resigned from the board altogether because he had been sidelined when he had uncovered that some service providers allegedly had links to some board members.

“Meetings are being held behind my back. The hatred for me is very high,” he said.

He said under his watch, the organisation had contracted with security, nursing and catering services, which with hindsight, had proved to be “very costly”.

“But when I suggested that we terminate those contracts and see if we can insource the same services, the board did not want to entertain that.

“But at that time, people were eating and were being cared for. Now the board seems to be putting itself first.”

The new chairperson, Sthandiwe Mkhize, said Shezi had been “terminated” because of allegations of misconduct.

He acknowledged that there had been disruptions through new service providers coming in. He said the catering contractor had been aggrieved.

Mkhize claimed a new service provider had been appointed.

“We will be transparent and account for all monies and donations and our books will be audited,” he said. Any funds which had been misappropriated would be recovered.

KZN department of social development spokesperson Mhlabunzima Memela said: “We are disturbed by reports of failure of governance and have been monitoring the situation and advising the board to change the way they do things.”

In spite of this, he said, there had been no real change in the financial situation.

“Although the department continues with the funding of this institution, with over R13m annually, it seems that the money is not used correctly.”

He said another intervention meeting was scheduled to be held on Friday to “ensure compliance with norms and standards and to determine that funding translates into deliverables”.

A Mpumalanga family went for days believing that their relative was recovering well at a hospital in Delmas, only to find her decomposed body in the ...
News
1 year ago

Basic health services were severely hampered in the last financial year as the national health department shifted its resources towards fighting ...
Politics
1 year ago