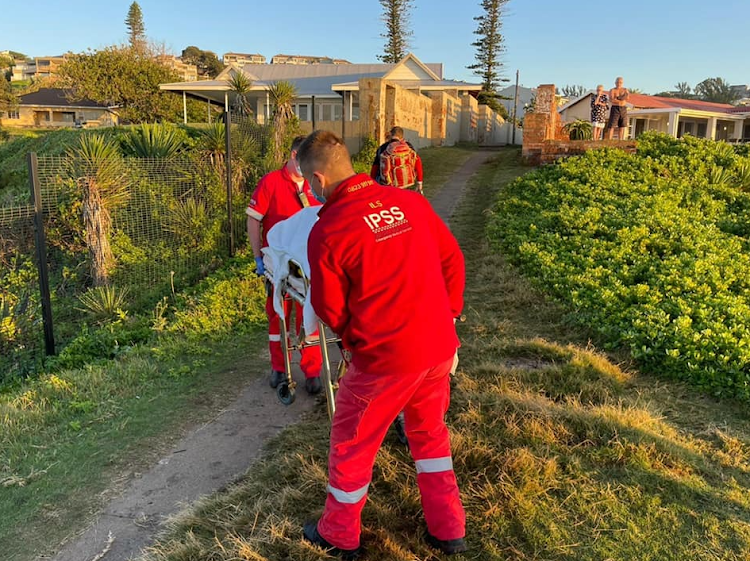 A fisherman was treated for serious injuries after a near-drowning incident on the KZN north coast on Saturday morning.
Image: Supplied

A fisherman sustained serious injury in a near-drowning at High Rock in Chaka's Rock on the KwaZulu-Natal north coast on Saturday morning.

IPSS Medical Rescue said the man was about to reel in his catch when a wave knocked him off the rocks and swept him into the sea.

“Early this morning IPSS Medical Rescue and Search division responded to High Rock in Chakas Rock, for reports of a fisherman in progress of drowning.  On arrival it was established that a fisherman had hooked a fish and was in the process of landing the catch, when a wave knocked the man and swept him off of the rocks and into the sea.”

A quick-thinking fellow fisherman rushed to the man's aid and managed to get him back onto the rocks, but not before he sustained serious injury.

“Paramedics stabilised the man before transporting him to a local medical facility. A word of thanks to the fellow fisherman who did a great job in performing the rescue,” IPSS said.

A Durban man has been lauded for his quick thinking and reaction after he saved the life of an 11-year-old boy who almost drowned at the Durban ...
News
1 year ago

A child died after falling into a canal outside Oudtshoorn in the Western Cape at the weekend.
News
1 year ago