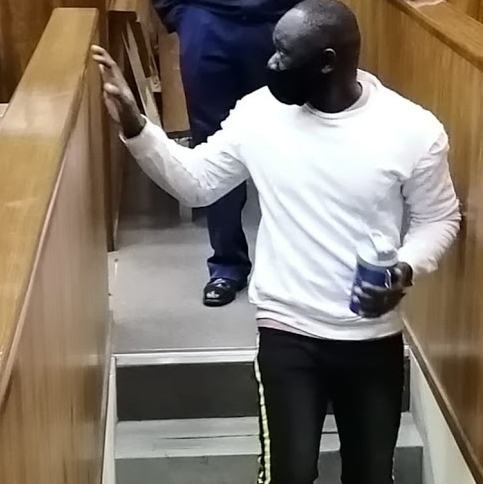 Elhadji Adama Kebe at the high court in Johannesburg on Tuesday. He was sentenced to 23 years in jail for decapitating his girlfriend in April 2019.
Image: Ernest Mabuza

The high court in Johannesburg departed from imposing the prescribed sentence of life for murder on Tuesday when it handed a 23-year prison sentence to a man who decapitated his girlfriend.

Elhadji Adama Kebe stabbed Sibongile Zenzile, 28, more than 10 times in the Kempton Park flat they shared on April 25 2019. He also cut off her head and kept it in their fridge.

He was arrested the next day at a shop run by the couple.

In passing sentence on Tuesday, judge Avrielle Maier-Frawley said at first blush the appropriate sentence seemed to be life imprisonment for the way Kebe killed Zenzile.

“The question the court needs to ask itself is whether life sentence is the only sentence to be imposed due to the manner in which the deceased was killed.”

Maier-Frawley said the more she had pondered the issue of sentence, she felt an injustice would be done if the minimum prescribed sentence of life imprisonment was imposed.

"[Kebe] did not seek to justify his actions by pleading self-defence and did not challenge the evidence of the state where it differed with his,” said Maier-Frawley.

She said Kebe had appreciated the severity of his actions and was prepared to face the consequences.

“He acknowledged he was at fault. That in my view is a first step on the long road to rehabilitation.”

'Sibongile was my girlfriend and accomplice ... I deeply regret what happened,' Elhadji Adama Kebe told the high court in Johannesburg on Wednesday.
News
1 year ago

Maier-Frawley said while the gravity and callousness of the offence should not be understated, justice needed to be blended with a measure of mercy.

“This was the accused's very first brush with the law. Although he is by no means a youth, he can reform his ways. Imposing a life sentence will likely break him and this is not the purpose of punishment,” the judge said.

The judge said that evidence revealed Kebe had engaged in an emotionally-charged dispute with Zenzile on the night of her killing. Zenzile had also tried to stab Kebe with a knife.

“This points to a measure of provocation but this may not be used to justify the accused's actions.”

She said one of the aggravating factors was that the crime fell under the category of gender-based violence, which was prevalent in the court's jurisdiction.

Another aggravating factor was that Zenzile's head had been cut off. The judge said post mortem results revealed that decapitation was the cause of death.

Maier-Frawley said the fact that Kebe was a first offender, had shown remorse for his deeds, had spent two years in prison awaiting trial, had come clean, and there were prospects for rehabilitation equated to substantial and compelling circumstances in the case.

“Having so found, I am at liberty to deviate from the prescribed minimum sentence for the crime of murder that he has committed.”

Maier-Frawley sentenced Kebe to 23 years in jail for murder and two years for the violation of a corpse.

She said the sentences would run concurrently .

The stepfather of a woman who was stabbed and decapitated expressed disappointment on Friday that the sentencing of her killer had been postponed.
News
1 year ago

Courtroom A in the Kempton Park magistrate's court was packed to capacity on Thursday as men and women gathered to demand justice for slain Sibongile ...
News
2 years ago