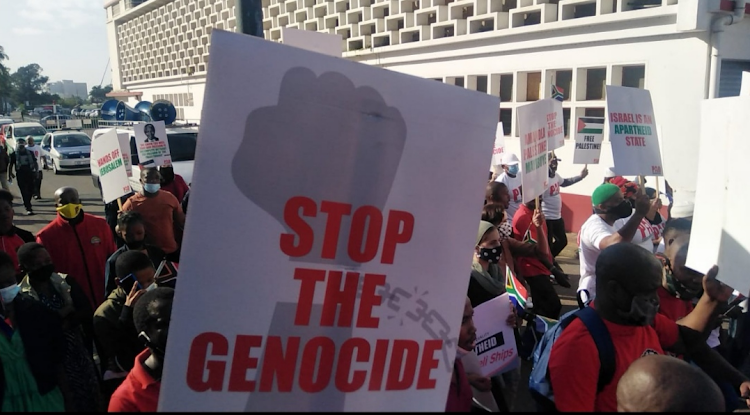 Labour movements show their support for Durban dock workers who have refused to offload cargo from an Israeli cargo ship
Image: Mluleki Mdletshe

Labour movements joined the SA Boycott, Divestment, Sanctions (SA BDS) Coalition at the Durban harbour on Friday to support dock workers who refused to offload cargo from an Israeli container ship in a stand against the conflict between Palestine and Israel.

The protest action follows a call by the Palestine General Federation of Trade Unions (PGFTU) to workers and trade unions to refuse to offload Israeli ships and goods at ports of entry.

Zim Shanghai, which is owned by Israeli state-owned company Zim Lines, docked in Durban on Wednesday.

It's part of a global series of actions against Zim Lines. The protests also targeted Transnet, demanding that SA ports refuse to allow goods heading to or from Israel to pass through.

The Israel-Palestine conflict dominated the international relations and co-operation department's budget debate on Thursday, with MPs split on their ...
Politics
11 months ago

Na’eem Jeenah of the SA BDS Coalition echoed the Palestinians' call for a global boycott, divestment and sanctions campaign against Israel.

“We are not sure what the cargo is, but the protest is against any Israel ship docking on SA shores. An additional dimension for the protest is the victory of the Palestinian resistance, particularly in Gaza, where a ceasefire came into effect this morning. Israel achieved none of its objectives in Gaza,” said Jeenah.

Cosatu KwaZulu-Natal secretary Edwin Mkhize said they were firmly against the senseless killing and abuse of Palestinian women and children in Israel.

He said the boycott against Israeli cargo at SA ports would send a “clear message” not to oppress the people of Palestine.

“As Cosatu we are here to pledge our solidarity with the Palestinian people. We are saying that the brutal killing of women and children by Israelis must stop.”

An Egyptian-mediated truce between Israel and Hamas began on Friday, but Hamas warned it still had its "hands on the trigger" and demanded Israel end ...
News
11 months ago