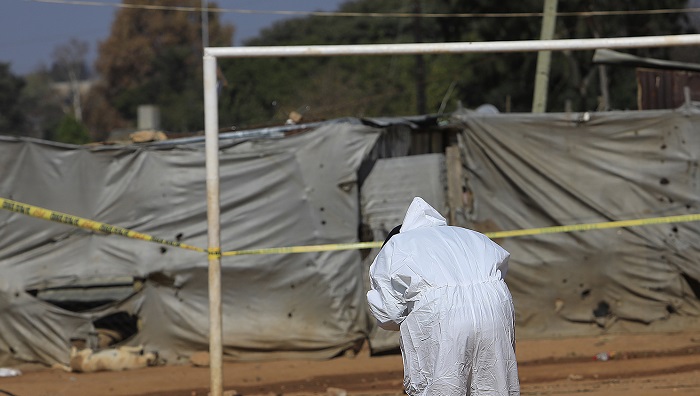 Police and crime scene experts on the scene of a mob justice attack in Zandspruit, where nine men were beaten and burnt.
Image: Alon Skuy/Sunday Times

Police spokesperson Capt Kay Makhubele said the three were arrested on murder, attempted murder and kidnapping charges in the township on Thursday evening. This brings the number of arrests to six.

Nine males were forcibly taken to a sports field and assaulted in the early hours of Wednesday morning. Their hands were tied and they were doused with petrol and set alight.

“They burnt tyres using petrol and put them around the guys’ necks ... I’ve never seen this happen before in 27 years living in Zandspruit,” local community forum member Kenneth Lekalakala said earlier this week.

Four men were initially found dead and five who were seriously injured were taken to hospital. Makhubele said on Thursday morning a fifth victim of the attack died in hospital and a sixth succumbed to his injuries that evening.

He said three men are still in a critical condition in hospital.

The arrested suspects are expected to appear in the Randburg magistrate’s court on Monday.

'They used whatever they could to hit them': Mob justice not uncommon in Zandspruit, says CPF

Mob justice is not an uncommon phenomenon in Zandspruit, Johannesburg, but it has never reached a point where more than one alleged assailant is ...
News
8 months ago

Patricia Seapi, the mother of one of the men killed in Zandspruit early on Wednesday, wants the perpetrators arrested, saying: “God will act on my ...
News
8 months ago

Gauteng police have confirmed that three people have been arrested after a mob justice incident in Johannesburg.
News
8 months ago