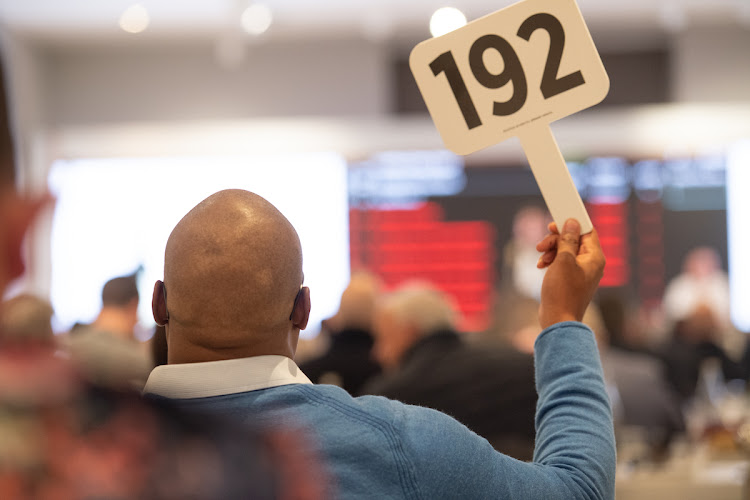 A bidder raises his paddle at the Cape Fine & rare Wine Auction in Stellenbosch on Saturday.
Image: Supplied

An extremely rare bottle of wine that was said to be Napoleon Bonaparte’s favourite, fetched nearly half a million rand on auction in Stellenbosch on Saturday.

The bottle, an 1821 Grand Constance made at the famous Groot Constantia estate, sold for R420,000 at the Cape Rare and Fine Wine auction.

The bottle is believed to be one of just 12 bottles in existence out of an allocation made for the deposed emperor.

It was snapped up by a client of famed UK auction house Christie’s, the organisers said.

About 82% of the 368 lots on offer, however, went to local buyers, the auction house said.

Are you a nice wine lover with cash to splash and the means to travel?

If so, head for the US, Italy or Spain, where the limited-edition pickings are as stupendous as the prices
Lifestyle
5 months ago

The auction, a hybrid live-online event which was live-streamed from the Rupert Museum in Stellenbosch, saw brisk bidding.

The average price received for a 750ml bottle of red wine was R804 and R490 on average for a bottle of white.

After a year that has battered the wine industry, the auction was a “beacon of resilience”, said auction director Niël Groenewald.

Buyers also contributed R131,000 to this year's charity recipient, the Pinotage Youth Academy, which has youth development programmes to prepare young people for working in the industry.

You’ve heard of white, red and rosé, but have you tried trendy orange wine?

After his defeat at the hands of the British in 1815, Napoleon was exiled to the remote volcanic outcrop of St Helena, 2,000km off the coast of Africa.

Determined not to make the same mistake they had previously when they imprisoned him on the island of Elba, the British set him up in a house on the island and sent hundreds of troops to guard him.

The task of provisioning Napoleon and his retinue as well as the garrison and the civilian population fell on the shoulders of one Joseph Luson, the British East India Company’s agent in Cape Town.

Grand Constance, which was made in the Cloete Cellar behind the original manor house at Groote Constantia, was supplied to Napoleon during his lonely exile from 1815 until he died in 1821.

The estate was founded by then Cape governor Simon van Der Stel in 1685.

By the 18th century, Constantia’s wines were garnering fame around the world and Constantia Wyn started fetching high prices at European wine auctions.

Princess Charlene has been getting her hands dirty in the fight to save our country’s rhinos from being pushed to the brink of extinction.
Lifestyle
5 months ago

This should come as no surprise: when people drink, social distancing tends to fly out the window.
Lifestyle
5 months ago