The health department is investigating the claims of poor treatment, but said preliminary finds were that he received adequate care. 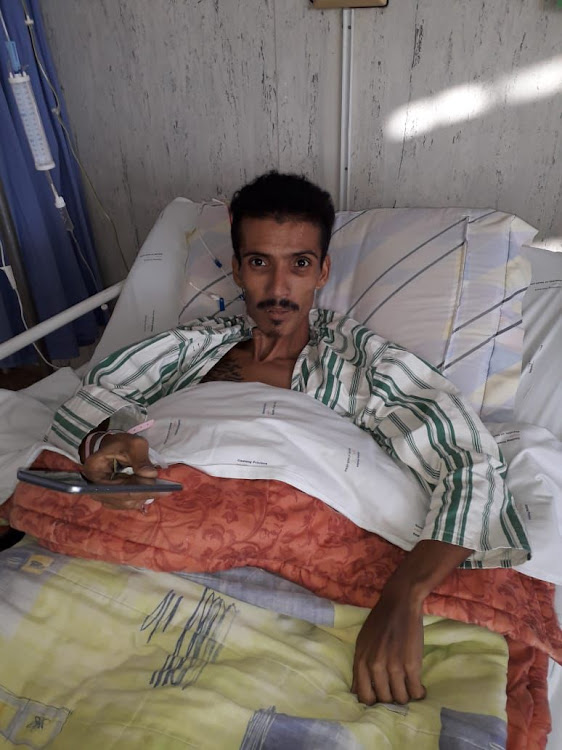 Garrith Anderson, 33, has lost a lot of weight as he recovers from an emergency operation at Helen Joseph Hospital in Johannesburg.
Image: Supplied

A Johannesburg resident is worried about his health due to what he claims is inadequate care by medical staff, which has left him with a gaping hole in his abdomen right near a burst colostomy bag.

The family of Garrith Anderson, 33, claim he was left lying in the colostomy debris for several hours as hospital workers were too busy to help clean him.

The Gauteng health department said they were still investigating the allegations — but that preliminary investigations revealed that Anderson did receive adequate care according to their protocols.

Anderson, 33, has had issues with his gut since having his appendix removed in 2007. Since then, he has received medical intervention for small bowel issues beginning with a bowel obstruction in 2008. From then until 2018, he was admitted to hospital several times after issues with scarring on his small intestine, as well as because of intestinal twisting.

On April 18 he was admitted to the South Rand Hospital in Rosettenville, Johannesburg, for a second bowel obstruction. He was discharged five days later, April 23. He was readmitted later that day after complications, and was transferred to Helen Joseph Hospital, where he remains admitted.

Patriotic Alliance leader in the Tshwane region, Virginia Keppler, said she had been asked to intervene after the poor treatment that the man received.

Anderson had been transferred to Helen Joseph, which had also received patients from Charlotte Maxeke Academic Hospital after the fire there on April 16.

Step down, DA tells Zweli Mkhize over 'looting' of funds under his watch

'It is now clear that this looting of public money has happened under the leadership of Dr Mkhize,' DA spokesperson Siviwe Gwarube said on Wednesday.
Politics
11 months ago

On May 1, Anderson’s bowel ruptured and he had to have emergency surgery. Parts of the bowel were removed and he now has a stoma — an opening created at the end of the colon, where parts of the digestive tract have been removed. A bag will be attached to the stoma — called a stoma bag or colostomy bag — which collects waste passed through the gut.

Because the stoma does not have nerves or muscles which can control movements of the digestive waste, the person with the stoma cannot control when they have a bowel movement, so the bag needs to be emptied and the stoma needs to be kept clean to prevent infection.

Anderson's cousin, Alyssa James, said that, according to him,  on the same day after the operation, he asked a nurse for a bed pan as he was not used to the feeling of the colostomy bag and believed he was having a bowel movement.

He claimed he was told: “Can’t you get the pan yourself?”

He responded that he had just had an operation and his middle had essentially been cut open. He then claims the nurse said to him: “You just don’t want to get better.”

On May 4, he said he could smell decay from the wound and said the nurses came to change him for the first time since the operation. This is when he saw that the wound was weeping fluid.

He claims the stitches had to be removed so the wound could be cleaned out.

The wound is completely open, with  Anderson saying the doctor advised that it needed to heal and get air and, thus, was allowed to remain open. The wound is dressed.

The issue, according to Anderson, is that his colostomy bag has allegedly not been cleaned. When he spoke to TimesLIVE on Monday, he said he had been made to lie in the stoma debris for several hours with an open wound.

TimesLIVE received the images sent by Anderson, many which we have chosen not to publish as they are too graphic. The pictures show the burst colostomy bag, which has soiled the bed, and Anderson. The contents of the bag have spread on to the bandages on his abdomen.

James said the family was very concerned over his condition.

James said Anderson was in a bad space mentally as he was in fear that he would die because of the poor treatment he received.

James, who was raised as Anderson's sister, said her cousin had gone to a “dark place mentally”.

“Mom is besides herself. With Covid-19, she can only see him for 15 minutes at 4pm. She can't take him anything . He's lost so much weight and is being fed by a drip. He looks like he's depleting [his reserves].

“He's been without work for the last year and a half and has not had medical aid. Just before he got sick he finally got a job [in IT]. He was excited because he has to look after his eight-year-old. Now he'll be in hospital for month. We're frightened he won't make it out alive. Our hands are tied — we don't know what to do any more — it's not like our family has money,” she said, adding that they would take him elsewhere if they could afford to do so.

“Yes, the hospital knows the patient. He was duly admitted as a referral from South Rand Hospital. We take the allegation seriously and we [are] still doing investigations in that regard.

“In our preliminary investigations we can confidently confirm that the patient received adequate care according to our protocols, which involves conservative management and surgery.

“The patient has been referred for psychological help and the hospital undertakes to continue to further provide psychological support.

“Helen Joseph Hospital will further interview the patient and assist with redress. Management undertaken to further investigate the allegations made against the nurses,” said Kekana.

Sir, we suggest you set up another press conference where you will finally do the honourable thing
Opinion & Analysis
11 months ago

The health ministry has admitted that there have been some "glaring irregularities" found in the awarding of a multimillion-rand contract to Digital ...
Politics
11 months ago