At just four-months-old, 'Mighty Mack' Mackenzie Friedman is a warrior for leukaemia sufferers 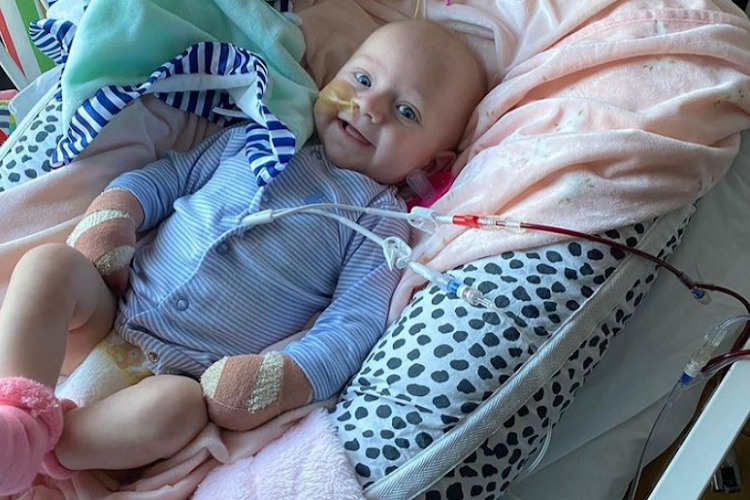 Mackenzie Friedman needs a marrow transplant but the chances of finding a donor are only one in 100,000 people. Mackenzie joined Instagram to raise awareness about the illness and has 3,200 followers, known as Mack's Army.
Image: Instagram/ Mackenzie Friedman

An acute myeloid leukaemia (AML) diagnosis for four-month-old Mackenzie Friedman has not only seen her spend most of her life in hospital receiving chemotherapy, but has also seen her become influential on social media by raising awareness about the disease.

Mackenzie, fondly known as “Mighty Mack”, was diagnosed with AML on May 12 and had suffered no health complications before.

Her mother, Megan Harrington-Johnson, told TimesLIVE: “She didn't show any symptoms at all. She'd just had her first fever and I thought she was teething. I panicked and took her to the doctor and she said she had a fever but didn't know why.”

They were soon referred to a paediatrician, who conducted a blood test and made the diagnosis.

“We haven't left the hospital in two weeks. Mackenzie is receiving chemotherapy,” said Harrington-Johnson. “She was on chemo for the past 10 days and she was fine during that period but unfortunately she has an infection, which is expected because the white blood cells have been destroyed by chemotherapy.

“She's very weak and is vomiting a lot,” said Harrington-Johnson.

What is acute myeloid leukaemia (AML)?

Two days after her diagnosis, Mackenzie joined Instagram to raise awareness about AML and has since built a community of over 3,200 followers, known as Mack's Army.

They donate blood and platelets, send messages of support and even offer to bring meals to her parents while they care for her in hospital.

The possibility of a bone marrow transfusion

Harrington-Johnson says Mackenzie may also require a bone marrow transfusion to help her produce healthy and cancer-free cells. This would be done through the SA Bone Marrow Registry (SABMR) which recruits bone marrow donors for patients in need of transplants.

Nadia Chalkley, head of recruitment at SABMR, told TimesLIVE that the chances of finding a bone marrow match are one in 100,000. This can change if more people register as volunteers and increase the chance of saving more lives.

There are currently 73,000 volunteers on the registry's database.

“It is our hope to reach 100,000 in the next two years but essentially we hope to recruit 100,000 donors in each demographic in SA,” said Chalkley.

Chalkley said education and raising awareness about bone marrow donation is important in getting more people to register.

“It’s important to clarify that bone marrow donors are not donating their actual bone or bone marrow; rather, they’re donating stem cells that are generated in their bone marrow, and it’s usually done through blood, not through surgery inside the bone.

“Bone marrow stem cells regenerate themselves naturally, so when you donate, your body quickly reproduces what you’ve donated, and your body is exactly the same afterwards as it was beforehand.”

David Butler died on Thursday morning surrounded by loved ones.
TshisaLIVE
5 months ago

World's first man to be cured of HIV dies of cancer

Tributes are pouring in for the world’s first person to be cured of HIV, Timothy Ray Brown, after he lost his battle with cancer.
News
1 year ago