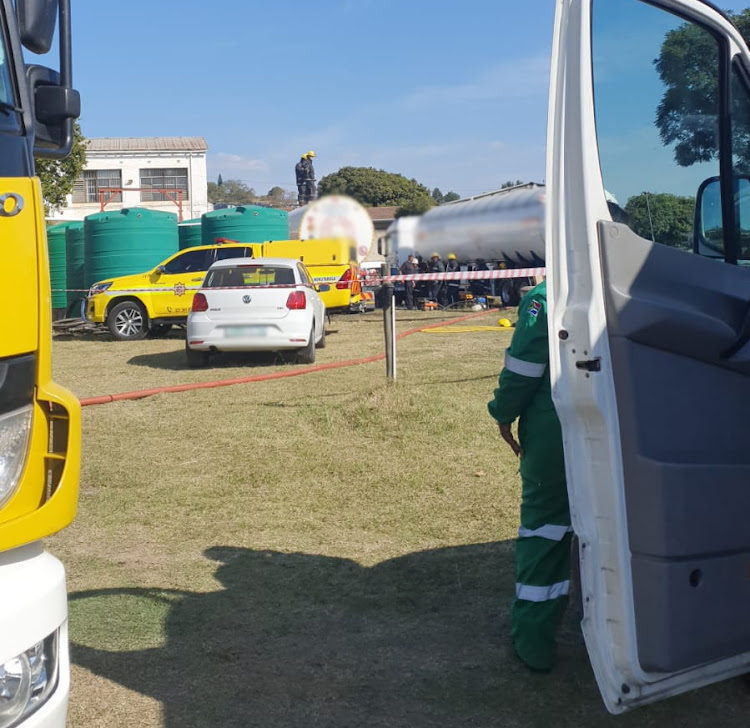 An explosion occurred inside a tanker while a man was inside at a cleaning service in KwaZulu-Natal.
Image: supplied

A man was killed and another injured in an industrial explosion at a cleaning service in Cliffdale in KwaZulu-Natal on Saturday.

ER24 spokesperson Ross Campbell said it was believed a small explosion occurred inside a tanker while a man was inside.

“The 40-year-old  injured patient is believed to have attempted to rescue the man but was overcome by carbon monoxide,” he said.

ER24 paramedics arrived on the scene at 10.15am with firefighters. “The 40-year-old male was found to have suffered moderate to serious injuries and was treated and transported to a private hospital in Hillcrest,” Campbell said.

The fire department was still recovering the body from inside the tanker on Saturday afternoon.

“The SA Police Service was also on the scene for further investigations,” said Campbell.

Indonesian state oil company Pertamina said on Monday it has shut its Balongan oil refinery in West Java as it battles to control a massive fire that ...
News
9 months ago

A KwaZulu-Natal man suffered severe burns in a gas explosion at a home in Shaka's Rock on the north coast.
News
8 months ago

Three workers were fatally injured after being buried under a massive pile of rubble.
News
10 months ago

Abalone with an expected street value of R900,000 and abalone drying equipment valued at around R60,000 was found in a Stellenbosch house when law ...
News
11 months ago