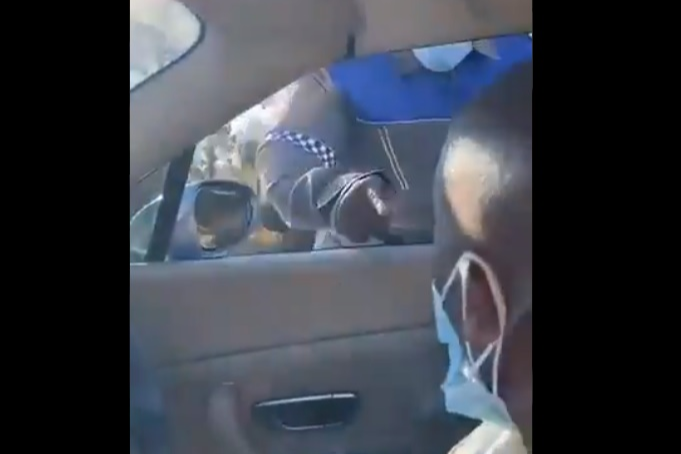 According to the Gauteng traffic department, the incident is believed to have taken place in Hartbeespoort.
Image: Screenshot

The Gauteng traffic department (GTD) has distanced itself from a viral video in which a “traffic officer” was filmed assaulting a motorist in a Bentley.

Department spokesperson Sello Maremane said the “officer” seen in the video was not employed by the provincial department of community safety and his vehicle did not belong to them.

“The uniform the officer was wearing was not the uniform issued to our traffic officers and the incident did not happen in our province,” said Maremane.

“We can confirm our officers adhere to the rules of the law. They will uphold and respect the rule of law at all times, including our constitutional obligations.”

In the widely circulated video, a motorist wearing a face mask is slapped by a man in uniform through the open driver’s window.

The officer picks up a pair of glasses on the ground and throws them into the car while shouting.

The “officer” then cocks his gun and shouts “Go!” at the driver, who then drives off.

The Road Traffic Management Corporation (RTMC) has also launched an investigation into the incident. On Sunday it called for the driver to report the incident to their nearest police station.

“We have noted this incident. The RTMC is investigating to authenticate if indeed this was a traffic officer.”

Transport minister Fikile Mbalula has condemned the actions of an alleged "fake cop" who was caught on camera assaulting a driver.
News
7 months ago

The police officer was so angry about being given a traffic fine that he tried to pin a criminal case on the traffic officer who fined him.
News
8 months ago

WATCH | 'Where did you drink?' – cop finds driver passed out behind wheel on N1 in Free State