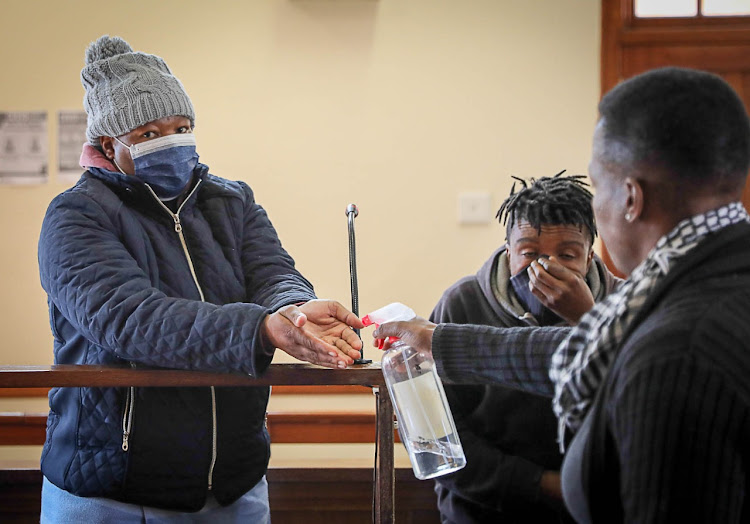 Modiehi Mofokeng is charged with corruption and setting up an illegal border post for stolen cars to pass through her SA property into Lesotho. She is pictured with co-accused Thabo Moji, a Lesotho citizen who was also charged with contravention of immigration laws.
Image: Sebabatso Mosamo/Sunday Times

There is little visible activity on the farm in Fouriesburg in the eastern Free State. Just a few bakkies in the yard, a tractor and three women plucking feathers from chickens.

On the surface, this is a regular village home with cracks in the walls, a dripping tap, and a makeshift chicken coop.

It is here, police allege, that a “tollgate” operates — a passageway used by criminals to smuggle stolen vehicles from SA into Lesotho.

The alleged tollgate operator is Modiehi Mofokeng, a widow arrested for allegedly aiding criminals to smuggle vehicles out of the country.

She was caught in an undercover Hawks operation on May 20. Officers posing as criminals who needed her help to get a stolen vehicle across the border had approached her. She allegedly agreed and demanded R1,000. Cash was paid, the Hawks said. Mofokeng and her alleged accomplice were immediately arrested.

The 38-year-old briefly appeared in the Fouriesburg magistrate’s court on Monday, together with her co-accused Thabo Moji, 28. 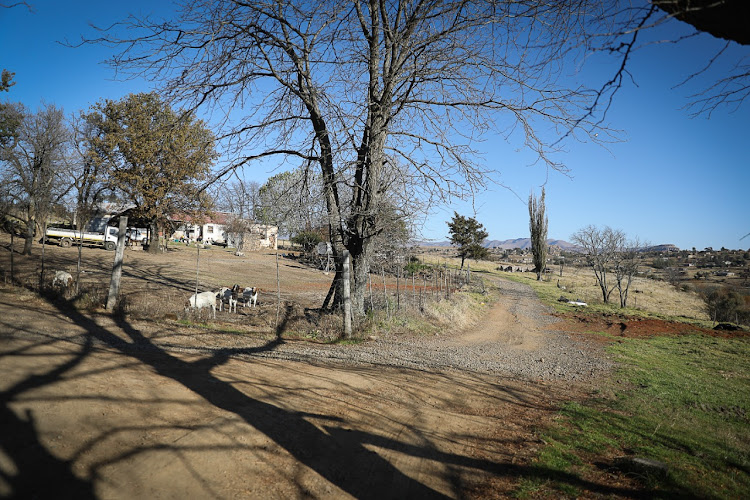 This farm was allegedly used as a gateway between SA and Lesotho, with the owner accused of charging R1,000 to facilitate stolen vehicles crossing the border.
Image: Sebabatso Mosamo/Sunday Times

But Mofokeng’s daughter Mpati believes her mother is innocent.

“ They [the Hawks team] said she almost smuggled a car across the border, but they returned with it after the whole thing.”

Her mother remains in custody until she reappears for a formal bail application on May 31. She was charged with corruption together with Moji, a Lesotho national who was also charged with contravention of immigration laws.

“We are left alone. This is affecting us badly,” said Mpati.

“This is new to me. Cars that cross do so far from us. I asked them to show us pictures of the cars they allege were smuggled, and they couldn’t.

“They should’ve at least given her bail. She has a minor child who needs her,” Mpati said.

Though their home is enclosed, the family confirmed that the surrounding land, leading to the Caledon River, was theirs.

The Hawks have arrested a woman in Fouriesburg, in the Free State, who allegedly set up a "tollgate", charging car thieves and illegal immigrants to ...
News
4 weeks ago

Mpati said her mother’s business is selling chickens and farming.

She said her mother is an honest woman trying to make ends meet.

“They traumatised us for nothing.”

Preventing livestock theft is their primary goal, but the patrollers are also helping to foil the illegal crossing of stolen vehicles and flow of ...
News
2 weeks ago

Riaan Corbett, from the Farmers Union in Fouriesburg, said they had been suspicious about the farm before the police investigation.

“Our problem with that farm was all the illegals [immigrants] are housed there. That’s why we asked them [Hawks] to check what is going on there.”

He said the activity was picked up on their cameras placed around the area.

“We have a good working relationship with the police,” said Corbett.

Mofokeng’s farm is situated close to the Caledon River which flows between Fouriesburg and Lesotho.

“The 4x4 vehicles can go through the river without assistance but when you have 2x2, you need help,” Corbett said.

The Caledon River between Lesotho and SA, located in Fouriesburg, Free State, is an area ripe for illegal cross-border activities ranging from seeking food to smuggling stolen goods. The systems involved in crossing the border have grown over the years, and turned into businesses, as more and more people need to cross over.

Two young children have died after allegedly being poisoned by their mother.
News
3 weeks ago

In just two weeks, at least 1,400 smugglers have been arrested as part of a joint operation between the SA Police Service and their Zimbabwean ...
News
2 months ago

A pedestrian was arrested along the N1 between Musina and the Beitbridge border post in Limpopo after police opened his cooler bag and found it ...
News
5 months ago