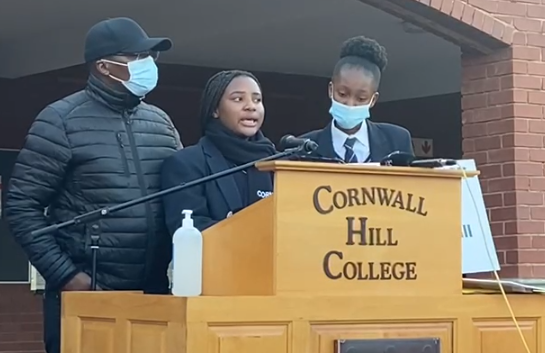 Cornwall Hill College pupil Singo Ravele says she suffered racism at the hands of a teacher at the school.
Image: Supplied/GDE

Singo Ravele, a pupil from the prestigious private school in Irene, opened up about her first encounter with racism when a teacher told her, “Your hair is unpresentable. It is messy and it is not the Cornwall way”.

Ravele said the teacher told her she would look better if she chemically straightened her hair.

“Looking back at the situation, I feel angry. I am angry that anyone would dare tell a child in Africa that their African hair is unacceptable. I am angry that I was stripped of my African identity that one time, in one moment and by one person,” said Ravele.

Sunday Times Daily reported that about 15 black parents held placards calling for an end to racism during the school’s annual fundraising golf day last Wednesday. The protest followed complaints raised by present and former pupils who wrote testimonials about alleged racism at the school and said their grievances had been ignored.

Executive principal Leon Kunneke apologised last year in a letter sent to parents, and said racism was “morally wrong” and contrary to the school’s values.

“The revolution salutes each and every one of these brave and intelligent young people. Nothing makes us more proud than a youth who stands their ground and speaks truth to power, fighting for dignity and justice. I’m personally inspired. Way to go,” said Ndlozi.

Here are other reactions on social media:

The story of #CornwallHillCollege is similar to what happened at Curro, Pretoria Girls High, St Mary's and other schools. Removing kids is not a solution, blacks must fight or racist will dictate that we must live at townships to avoid racism. #powerbreakfast

It’s sad that our pursuit of excellence will always have us in white spaces where we are not wanted & are constantly reminded of that fact, our own schools do not measure up to these standards because funding? teachers don’t care? We don’t care ?corruption? #CornwallHillCollege

I'm this day and age, how do you tell an African child, in Africa that their African hair is unacceptable!?
😠#cornwallhillcollege

If your idea of a solution to racism in schools is for parents to take their children to another school, you're part of the problem. There's absolutely not a single space that should be unsafe for a black child #CornwallHillCollege

I really wish younger me wasn’t so naive and timid back then. These kids today have shown so much strength that I wish I had. Big ups to them #cornwallhillcollege

A pupil at the prestigious Cornwall Hill College in Pretoria wept on Monday when she spoke about how she was in grade 4 when she had her first ...
News
11 months ago

Black parents air concerns about lack of action over teacher diversity and other issues. Principal vows to listen
News
11 months ago