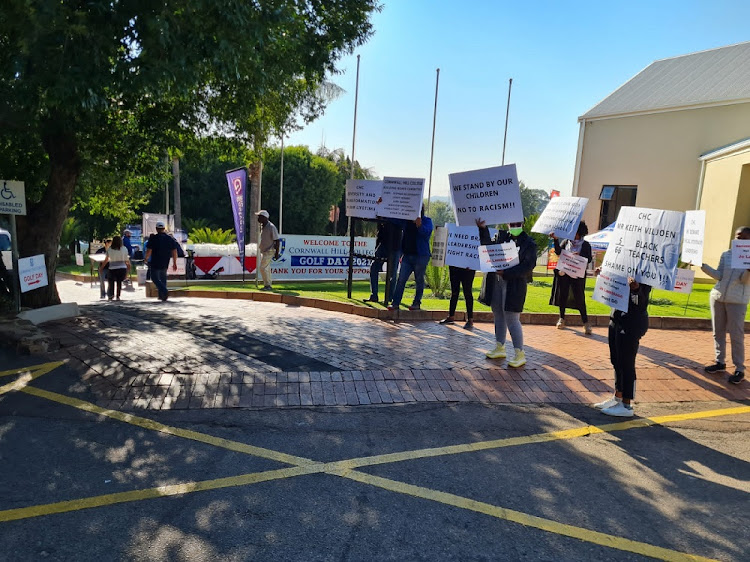 A group of parents protested against the lack of transformation at the upmarket private school in Centurion. File image
Image: Supplied

SA schools that were reserved for white pupils during apartheid should recruit more black educators, teach more African languages and change admissions criteria, according to the country’s central bank governor.

Lesetja Kganyago’s says add to a growing debate about integrating more black South Africans into one of the world’s most-unequal societies, where racial inequalities persist more than a quarter century after the end of white-minority rule. He joined a group of parents in an antiracism protest at Cornwall Hill College, a private school attended by his daughter near Pretoria, the capital.

“The school has got to consciously go out and look for black teachers to give our children pride to actually look and know that there are black people who are excelling in the education sphere,” Kganyago told broadcaster eNCA on Monday while at the protest.

Reports of a lack of transformation at the school have spurred protests, as have allegations by Black students that they experienced discrimination. In a May 26 statement, the school said it was revisiting its hair policy, diversity training and the structure of its board.

While schools and cities haven’t officially been divided by race since the end of White-minority rule in 1994, disparities in wealth and an apartheid strategy of placing so-called townships, where many Blacks were compelled to live, on the periphery of cities, has meant that inequities persist.

A pupil at the prestigious Cornwall Hill College in Pretoria wept on Monday when she spoke about how she was in grade 4 when she had her first ...
News
3 months ago

That has resulted in student bodies that don’t reflect the country’s demographics. Apartheid laws meant that Blacks and other racial groups that were discriminated against were given an inferior education and barred from certain professions. That has resulted in unequal access to post-school training and contributed to the slow pace of transformation in workplaces ranging from schools to banks.

In recent years, antiracism protests at schools have been driven by non-inclusive dress-code rules about natural hair and the wearing of religious symbols. Last year reports emerged that invitations to a private gathering for a Cape-Town school’s final-year pupils had mainly been extended to White pupils.

Cornwall Hill College charges annual fees of as much as R93,550, putting it out of the reach of most South Africans. In 2015 employed White South Africans on average earned three times more than Blacks with jobs.

SA spends about 14% of its budget on primary and secondary education at government schools, more than on any other expenditure item. However, the persistent poorquality of education in historically disadvantaged communities that serve the majority of its children continues to weigh on outcomes in a country where almost a third of the workforce is unemployed.

Its quality of schooling was ranked 114th out of 137 countries by the World Economic Forum in 2017, the last time the organisation published the measure in its Global Competitiveness Index. The school system is held back by a lack of knowledge among educators, an uneven availability of textbooks and labour unions that “fervently resist any policy to monitor teachers by blocking accountability reforms”, the International Monetary Fund said in a 2019 report.

Black staff at the historically-White SA Reserve Bank made up 76% of its total workforce in 2020, compared with about 65% six years earlier, according to central bank data, when Kganyago was appointed governor.

“What is important is for the school to publicly acknowledge that racism is a systemic problem at Cornwall Hill College and to deal with that,” Kganyago said in a later interview with the same broadcaster. “I have had the situation of my daughter who experienced racism at the school and the kind of things that were said are not worth repeating on a public platform.”

Black parents air concerns about lack of action over teacher diversity and other issues. Principal vows to listen
News
3 months ago

Basic education deputy minister Reginah Mhaule told parliament on Thursday the department will embark on a nationwide roadshow in a bid to stamp out ...
Politics
3 months ago