Does athletes' black eyeliner actually work? Thanks to research into falcons, we might have an answer 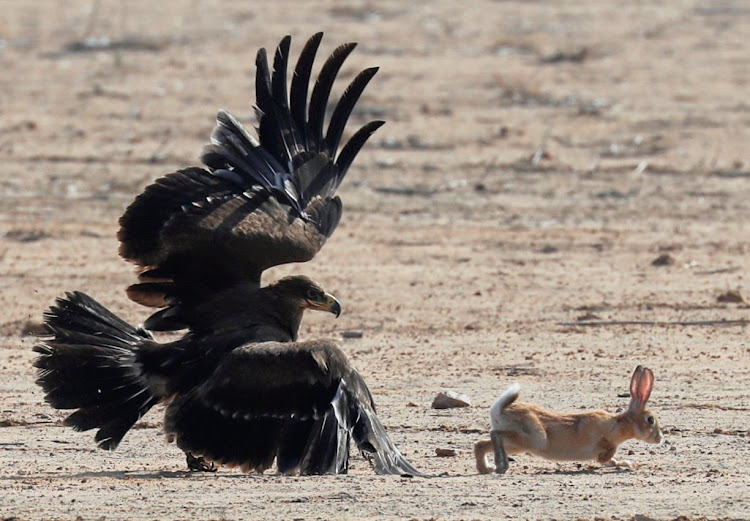 GET OUT OF MY HARE, FALCON A falcon catches a hare on World Falconry Day in Alexandria, Egypt. Research at Wits and UCT has proven for the first time that dark 'eyeliner' feathers of peregrine falcons act as sun shields to improve their hunting ability.
Image: Reuters/Amr Abdallah Dalsh

Though it’s never been conclusively proven, athletes have for years smeared black stripes under their eyes in the belief that these stripes mitigate the effects of bright sunlight or floodlights, which can cause glare and impair vision.

But now a new study has shown that, perhaps, this thinking is not misplaced. And it all comes down to falcons.

Scientists have also long speculated that the falcon’s eye markings improve their ability to target fast-moving prey, like pigeons and doves, in bright sunlight. And new local research has proven for the first time that this is indeed the case — and that the “dark eyeliner” feathers of peregrine falcons act as sun shields to improve its hunting ability.

Falcons are known for their ability to spot, chase and kill prey quietly and efficiently, and humans have relied on them for millennia as effective hunting partners.

The new study by researchers at the University of Cape Town and Wits University, which has been published in the Biology Letter journal, suggest that these dark markings beneath falcon’s eyes, known as the malar stripe or “moustache”, have evolved according to the climate. The sunnier the bird’s habitat, the larger and darker are the telltale dark “sunshade” feathers.

It’s an evolutionary trait mimicked by some top athletes who smear dark makeup below their eyes, also known as “eye black” phenomenon, to help them spot fast-moving balls in competitive sports.

Until now, there had been no scientific study linking solar radiation levels to the dark “eyeliner” plumage, which is common to many other falcon species.

The local scientists used photos of peregrine falcons from around the world posted on the web by bird watchers and scored the size of the malar stripe for each bird. They then explored how these malar stripes varied in relation to aspects of the local climate, such as temperature, rainfall and strength of sunlight.

The study involved comparing malar stripe characteristics, including width and prominence, of individual peregrine falcons, by using more than 2,000

peregrine photographs stored in online citizen science libraries. Researchers examined samples from 94 different regions or countries. Results showed that peregrine falcon malar stripes were larger and darker in regions of the world where sunlight is stronger.

Lead researcher Michelle Vrettos, an MSc student from UCT, said: “The solar glare hypothesis has become ingrained in popular literature, but has never been tested empirically before. Our results suggest that the function of the malar stripe in peregrines is best explained by this solar glare hypothesis.”

Associate professor Arjun Amar from the UCT FitzPatrick Institute, who supervised the research, said: “The peregrine falcon represents the ideal species to explore this long-standing hypothesis, because it has one of the most widespread distributions of all bird species, being present on every continent except Antarctica — it is therefore exposed to some of the brightest and some of the dullest areas around the globe.”

“We are grateful to all the photographers around the world who have deposited their photos on to websites. Without their efforts this research would not have been possible,” Amar said.”

Curious pets often have the most interesting owners

When she stumbled across a women walking her ferrets in the UK, Jacci Babich never imagined she'd end up getting an education in falconary
Lifestyle
4 years ago

Sports players are using CBD products to legally enhance performance, while disciples say it should be used by everyone in their daily health regime
Lifestyle
1 year ago

The science is legit: new pill does the work of exercise

Research backs up the claims that 516, the secret ingredient in these fitness pills, really works, but health authorities are hesitant to approve its ...
Lifestyle
4 years ago