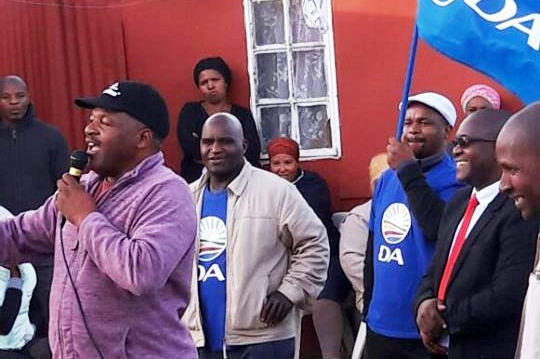 Three suspects, including a Stellenbosch municipal office bearer, were taken into custody by the police on Monday night in connection with the 2019 murder of former Stellenbosch deputy mayor Cameron Mcako.

The 56-year-old Mcako was shot outside his Kayamandi tavern on November 1 2019 in what police believe was a politically motivated murder. He died of his injuries two days later.

“The thorough investigation led detectives to a husband and wife, aged 56 and 46, and a third male suspect, aged 48, who are scheduled to make their court appearance in Stellenbosch tomorrow [Wednesday] on charges of murder and conspiracy to commit murder,” said Western Cape police spokesperson Col Andrè Traut.

“Police management in the province congratulated the detectives for their diligence to pursue the case so the perpetrators can see their day in a court of law.”

Mcako was one of several people killed in Kayamandi in 2019 during a turbulent year when land grabs by fringe political figures made international headlines.

Former Stellenbosch deputy mayor Cameron Mcako has died in a hail of bullets.
News
1 year ago

Land grab leader Midas Wanana was murdered in Kayamandi in September 2019 in what is believed to have been a power struggle for control of Kayamandi.

Wanana and his associate Zola Ndlasi broke Mcako’s hold over Kayamandi when they initiated a land grab on disused vineyards owned by wine farmer Stefan Smit.

Smit was murdered in August 2019, two weeks after the portion of his property invaded by former shack dwellers from Kayamandi was bought by the municipality to settle the dispute.

His wife has since been taken into custody in connection with his murder.

Wanana had organised a march against Mcako, to be held on the day he was murdered, complaining that Mcako was blocking service delivery to Kayamandi.

Two men in their 50s were arrested early on Thursday by police investigating the murder of farmer Stefan Smit more than a year ago on his wine estate ...
News
7 months ago

Fewer farm attacks, but more murders on SA's farms in 2020

In July 2020, Zakiyya Ahmedjan Ismail was brutally murdered during a home invasion on her farm in Weenen, KwaZulu-Natal.
News
5 months ago