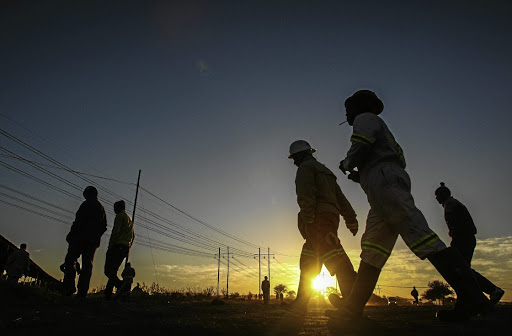 A man who was allegedly injured in a clash between illegal miners has been charged with murder in Graskop.
Image: File / SIMPHIWE NKWALI

An illegal gold miner who was severely injured in a clash in which four other illegal miners were killed has been charged with their murders, Mpumalanga police said on Thursday.

Brig Leonard Hlathi said it was believed two groups of illegal miners had clashed at the Transvaal Gold Mining Estates in Dientjie near Graskop on Saturday.

“According to information, a fight broke out between two groups of illegal miners and four men were killed in the process and their bodies dumped in a mine shaft. Another victim was severely assaulted and taken to hospital for medical treatment,” said Hlathi.

“Police were then informed about the killings and through their probe, discovered that the man at hospital was actually involved in the whole saga,” Hlathi said.

“The suspect was then arrested and is currently under police guard at hospital. As soon as he recovers from his injuries, he will make an appearance before court,” Hlathi added.

Police on Wednesday recovered the bodies of the four men who had been thrown down the shaft.

Acting Mpumalanga police commissioner, Maj-Gen Thulani Phahla, has strongly condemned the incident and ordered the arrest of the other suspects allegedly responsible for the killings.

“This incident has shown once again the dangers of unlawful and unauthorised mining which often put the lives of those involved at risk.”

When the national lockdown was announced in March, informal miner Fadzi Manono was underground and digging for gold at a mine in Benoni
News
1 year ago

The Hawks have welcomed the sentence meted out by the Welkom Magistrate's Court to a man who was found in possession of unwrought gold.
News
2 years ago

An alleged illegal miner had both his legs amputated by a digger in the City Deep area of Johannesburg on Sunday morning, paramedics said.
News
2 years ago