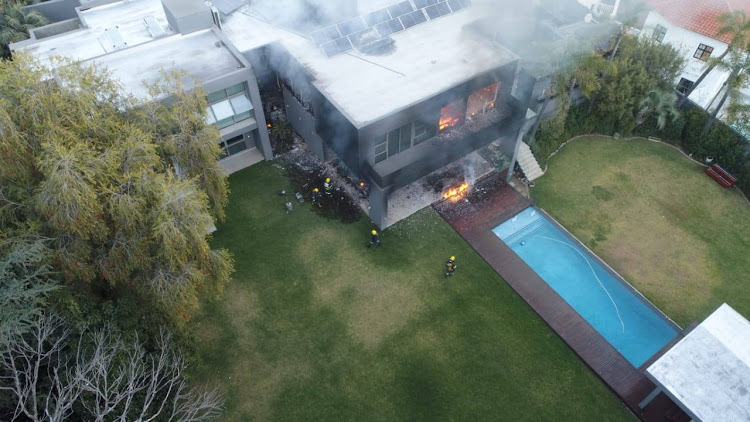 Firefighters at the scene of a house fire in Hyde Park, Johannesburg.
Image: Suburban Control Centre/Facebook

A fire in the upmarket Johannesburg suburb of Hyde Park that gutted a home has shone a spotlight on faulty fire hydrants and the shortage of fire engines in the city.

The house was severely damaged last week while the city’s fire department struggled to find a nearby hydrant with enough pressure to fill its fire engine tank.

The Sandton fire station was called for assistance but it did not have a fire engine. One stationed in Alexandra responded to the emergency.

“The fire engine that had to be activated is the one in Alexandra,” he said.

Jozi, services are going to cost you, but don’t worry, the fire engines will rock

Joburg residents will fork out between 2% and 15% more for utilities, but the city is promising big things in return
News
11 months ago

“We have to divide the city into six districts, with one fire engine in each district.”

He said fire engines usually carried water to an incident but needed to connect to a fire hydrant to ensure there was additional water.

“What happened in this case is with the one hydrant there, the pressure was not enough to fill the tank.”

He said the fire engine had to drive to a suitable hydrant to fill up.

That is what happens. Most hydrants are not in good condition — either they are damaged or they do not have enough pressure.

“That is what happens. Most hydrants are not in good condition — either they are damaged or they do not have enough pressure.”

Days later, a house in Northcliff, northern Johannesburg, burnt down.

Fire Ops, a privately owned firefighting operation​ which was the first on the scene after hearing about the fire on social media on Tuesday evening, took 12 minutes to reach the house in Acacia Road.

Fire Ops chief fire officer Wynand Engelbrecht said when its firefighting team reached the scene, the house was “very late” into the fire.

“We took 12 minutes. By then the house was well alight and nothing could be salvaged. We only protected the neighbours’ houses to make sure the fire did not spread,” he said.

“I am told the people only lived in that house for four days. They moved in four days before.”

He said the Johannesburg fire department arrived at the house about 20 minutes after the Fire Ops team.

A Massive Fire has destroyed a beautiful home In Acacia Street, Northcliff. The exact circumstances around the start of...

Mulaudzi said the city would soon have additional fire engines which would decrease its response times.

City of Johannesburg spokesperson Nthatisi Modingoane said earlier this month the city had acquired a new fleet of 20 specialised vehicles to fight fires.

Martin Williams, councillor for ward 90 which includes Hyde Park, said this week the shortage of fire engines was a problem.

“On May 20 there was a fire in Delta Park that seemed to threaten houses in Hamilton and Marlborough avenues in Craighall Park. On that occasion a fire engine dispatched from Alexandra reached the scene in about 25 minutes, which is quite good by Joburg standards. Fortunately the fire was well contained,” Williams said.

He said residents’ associations and security companies were aware of the shortage of fire engines. “They tend to contact private companies in an emergency.”

In response to a question Williams put to the city in March, he was told EMS had seven fire engines strategically placed at stations to ensure that for every fire there was a vehicle with a response time of 15 to 20 minutes.

The high court in Johannesburg this week set aside a tender worth more than R500m awarded to TFM Industries to supply the city with 92 fire and ...
News
1 year ago

The oncology unit is due to reopen this week, but officials cannot forecast when the rest of the facility will be operational
News
11 months ago