We'd be thrilled if HIV and TB got this much attention, says Sisonke trial leader 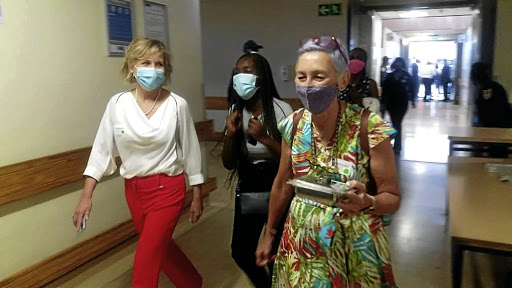 Prof Linda-Gail Bekker, co-lead investigator on the Sisonke trial, has cautioned that we drop the ball on HIV and tuberculosis at our peril as we battle Covid-19.

Speaking at the Cape Town Press Club on Wednesday, she said: “It is 40 years this week since HIV was first described in gay men on the west coast of America and we are still looking for a safe prophylactic against the virus. I have spent most of my adult career as a scientist looking for that vaccine.”

In contrast, she said, “We were able to hear about emergency-use approval for the first Covid vaccine about 11 months after the gene of SARS-CoV-2 was first published.”

This she described as “unprecedented and a triumph for humanity”. But she pointed out that $39bn (about R529bn) went into the discovery.

Bekker said the success of Covid-19 vaccines was built on investments in seeking an HIV vaccine. But because of the pandemic, mother-to-child HIV transmission was increasing in parts of Africa, and it was important not to “drop the ball on HIV and TB”.

Four out of five people in poorer or more remote areas will not receive a Covid-19 vaccination this year, according to global predictions.
News
6 months ago

The pandemic had also raised the ghost of battles for equity that haunted HIV treatment. “This conversation on inequity is one that should happen on a global scale,” she said.

“We see some countries vaccinating children; and here we sit with elderly people and those with a large number of comorbidities who have not been vaccinated yet. This has transported me back 20 years in time to the story of antiretrovirals.”

She recalled how in some countries, HIV-positive people on the brink of death were given  ARVs as a desperate bid to try save them, while in SA the need was insatiable but  provision was blocked by government denialism.

“We took to the streets for ARVs back then, but it took a lot of blood and sweat and we lost a lot of lives in the meantime.”

This time around, we should keep fighting the good fight for equitable distribution while still applauding the speed at which vaccines were developed, she said.

What had also made things easier this time around, compared to the HIV-denialism era, is the political will. “It is absolutely crucial to have political will and leadership,” said Bekker, adding that even though it had not been perfect, it stood in sharp contrast to the response to HIV and TB.

“If we had this kind of attention for HIV and TB, we would all be very thrilled. We have never vaccinated this many adults, so it takes incredible leadership.”

Evaluating vaccines and chasing down ‘breakthrough infections’ are key to success

While the first week of SA's vaccine rollout has been given a tentative thumbs-up, vaccinations and registrations need to be ramped up quickly, say ...
News
6 months ago

J&J side effects are rare. Here’s the underlying reason for them