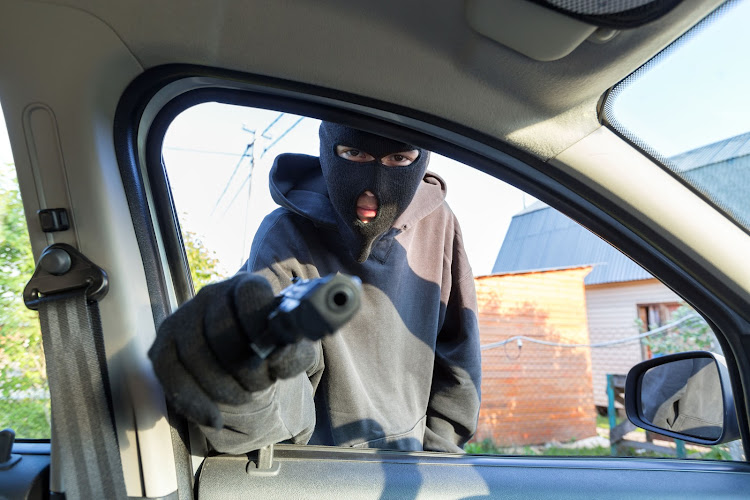 Runners for the syndicates, such as robbers, are immediately replaced when they are arrested or shot, says crime and violence analyst Dr Chris de Kock. Stock photo.
Image: 123RF/Sergey Lavrentyev

De Kock, former head of the crime information analysis centre at the SAPS, said car hijacking as a crime category showed the highest increase in 2019/20 with 18,162 cases.

This was the highest since the hijacking category was first recorded in 2001/02.

“It is 12.6% of all aggravated robberies,” De Kock said during a webinar on car hijackings on Thursday.

He said if there had been no Covid-19 related lockdowns in the first quarter of the 2020/21 financial year — when carjacking declined by 20% — the country would have had the highest figures for the year ending March 2021.

For the police to register successes against this crime, he said, they should target the top of the syndicates. If the police could target the masterminds who ordered the vehicles for cloning, exports and parts, headway could be made in reducing this crime.

“If police could identify them, get intelligence on them and arrest them. Otherwise it will not stop.”

He said the runners for the syndicates, such as robbers, were replaced as soon as they were arrested or shot.

De Kock said at police station level, if it was known what type of crimes were happening and when, they could perform visible policing based on that information.

He said there was a time in the past in the SAPS when crime reduction targets were set and a lot of emphasis was placed on accountability by officials.

“People who were not doing well were taken to the cleaners.”

De Kock said it was important that information about carjacking hotspots and methods were shared with the public. In almost 85% of carjackings a firearm was used.

“If a firearm plays such a very important role, if you take arms away from the public, firearms belonging to the criminals will still be active and [they will] do these kind of things,” he said.

De Kock said before 2000, most hijacked vehicles were sedans and hatchbacks, and the majority were taken in the more affluent suburbs of Gauteng and the Western Cape.

“Now there is a shift as more people are travelling in bakkies and SUVs.”

South Africans have until the Friday to comment on the proposed Firearms Control Amendment Bill.
News
7 months ago

“A lot of syndicates were dismantled and [bosses] arrested over those years. There were fears from government that hijackings may be negative for the [2010 Football] World Cup.”

Geospatial specialist Craig Schwabe said many of the smaller towns and rural towns had few or no cases of car hijacking. In the case of metropolitan areas, however, it was the opposite.

Nyanga in the Western Cape registered 383 cases in the 2019/20 year, the highest in the country. Other stations in the top 10 were Mamelodi East, Philippi East, Booysens, Harare, Khayelitsha, Moroka, Honeydew, Vosman and Gugulethu.

“There has been a movement from higher per capita areas to townships of metro areas in the country. There is intensification of these crimes in township areas. It is something of significant concern,” said Schwabe.

Eight men suspected of being part of a syndicate that hijacks trucks in Gauteng were arrested on Tuesday.
News
7 months ago

Free State cops have arrested a police clerk and two other suspects for allegedly hijacking a truck, as well as for armed robbery and kidnapping.
News
7 months ago