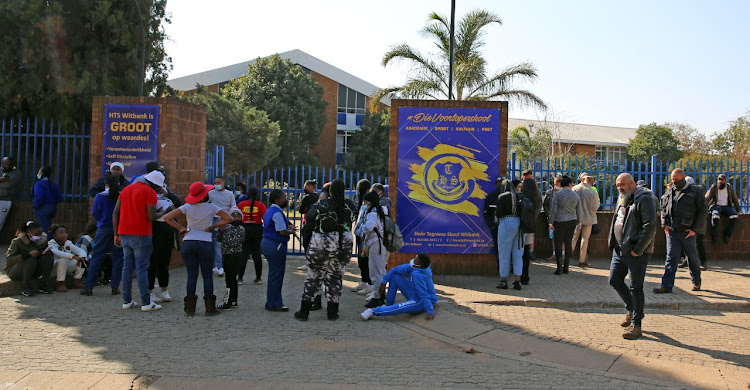 Outside the school gates where parents became embroiled in a scuffle earlier on Monday.
Image: Thapelo Morebudi / Sunday Times

That was the text message Pieter van Zyl received from his daughter, prompting him to  rush to Witbank Technical High School in eMalahleni, Mpumalanga, where white and black parents clashed on Monday.

Classes at the school have been suspended for a week.

At the centre of the dispute was the suspension of two black pupils who appeared in a viral video allegedly assaulting a white pupil.

Van Zyl told TimesLIVE that parents heard that there would be a protest at the school on Monday and some gathered there for a prayer session.

“This is a Christian school, and what is on display here reflects none of the Christian values,” Quintin Ntuli told TimesLIVE. He has three children at the school.

He was speaking after black and white parents exchanged blows in a dispute over alleged racial discrimination at the school.

[WATCH] Violence ensued outside the Witbank Technical High School in Mpumalanga between parents. Black parents are protesting after an alleged racism incident happened at the school last week Tuesday. @mwelimasilela is monitoring the story. pic.twitter.com/vvYUMz6hwQ

Some of the white parents said they had arrived to protect the property from being damaged by protesting pupils and parents.

“We can't afford to see any damage being done on the school property, so that's why we came here,” said one person who declined to be named.

Another parent, who arrived after receiving a text from his child, said: “I'm here to make sure that all kids are protected and safe because I heard of the unrest. I dropped my work and came here as quickly as I could,” he told TimesLIVE.

He said his daughter was terrified by events unfolding at the school. “This is her first year in high school so she's still very fragile and not used to this type of thing,” he said.

Mid-term exams were suspended on Monday morning and by afternoon the situation was calm after most people had dispersed.

A mother, whose child was implicated in the alleged assault video, said he had been suspended but she felt the school had handled the issue poorly.

“The school sent the video to the local newspaper without our consent as parents. They also didn't suspend all the pupils who were also fighting. Why did they suspend our kids only?” she asked.

The suspended pupils will face a hearing on Thursday.

A pupil at the prestigious Cornwall Hill College in Pretoria wept on Monday when she spoke about how she was in grade 4 when she had her first ...
News
1 year ago

Is the new grade nine certificate a pass or a fail? This is what the experts say

Williams was fired after the death of Enock Mpianzi. The 13-year old grade 8 pupil died at the Nyati Bush and Riverbreak lodge near Brits during a ...
News
1 year ago