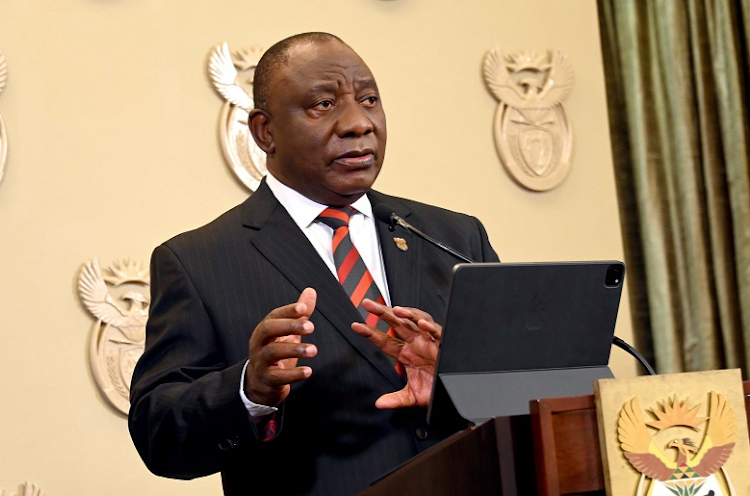 President Cyril Ramaphosa announced that SA will be moving to level 3 of the nationwide lockdown.
Image: GCIS

Social media was flooded with reaction to President Cyril Ramaphosa's announcement on Tuesday that SA will be moving to lockdown alert level 3 to try curb the spread of Covid-19.

Ramaphosa addressed the nation on developments in the country’s response to the pandemic, confirming that SA was in the third wave of Covid-19 infections and drew attention to the spike in new cases.

He said Gauteng was the hardest hit province, accounting for nearly two-thirds of new cases measured over the past week.

To try curb the spread of the virus, Ramaphosa announced several restrictions, including a nationwide curfew between 10pm and 4am.

All gatherings, including religious, political and social, are limited to 50 people indoors, 100 outdoors, with a 50% capacity indoors in smaller spaces.

On social media, the hashtag #FamilyMeetings topped the trends list, as users weighed in on the updated regulations.

All these Levels are starting to look the same to me now.

So what aren't we allowed to do agian in Level 3?#FamilyMeeting pic.twitter.com/wB2HwjGdeJ

I wish we could replace the #FamilyMeeting with a #FamilyEmail.

Let’s get to the point… pic.twitter.com/m5mwofciYz

The only thing keeping the family tweeting is the “sale of Alcohol “ #FamilyMeeting pic.twitter.com/PoAfRJFyAa

The more things change, the more they remain the same, my take from the President's speech #Level3 #Familymeeting #CyrilRamaphosa #StaySafe

#FamilyMeeting Am I the only one who changed the channel after I heard alcohol will not be closed? pic.twitter.com/HscM85Yq6C

First we were not allowed to celebrate Heritage Day, but told to sing Jerusalema!❌

Then we not allowed to go for easter gatherings & ceremonies!

Hai I should’ve went to groove one more time and celebrated June 16 today because tomorrow is cancelled 💔 #FamilyMeeting pic.twitter.com/1qYMxtnV2G

Do you still remember when we thought Lockdown would only be for 21 days? #FamilyMeeting | #lockdown | #ThirdWave pic.twitter.com/T9k07HJcmF

President Cyril Ramaphosa on Tuesday moved the country to lockdown level 3 amid a surge of Covid-19 cases, particularly in Gauteng.
Politics
1 year ago

IN FULL | 'We have to act decisively and quickly to save lives': Ramaphosa's full address to SA on the move to level 3

President Cyril Ramaphosa on Tuesday announced that the country would be moved to lockdown level 3 restrictions.
Politics
1 year ago

'Level 2 does not have sufficient impact': David Makhura hints at harder lockdown for Gauteng