Laughter 'keeps us in love’: Mmusi Maimane and wife Natalie on married life 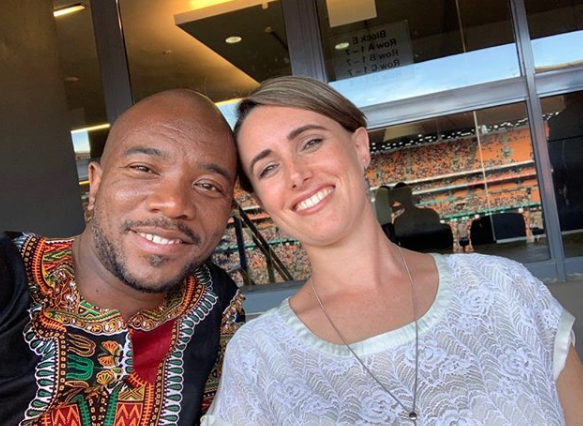 “Laughter is one of the major keys that keeps us in love with each other.”

There are the words of One SA Movement leader Mmusi Maimane’s wife, Natalie.

The couple recently opened up about their marriage and how they have coped with the ups and downs of having public lives.

In an interview on Chim’s Talk Africa, Mmusi and Natalie gave social media users a glimpse into their lives outside politics, sharing some of their secrets for a happy marriage.

Mmusi said one of the keys is laughter and “fighting to stay in”.

“I think it sounds simplistic, but I wish someone had told me that earlier on because sometimes we take everything seriously. Laughing means we have a point of connection.”

Natalie said she blocks the outside noise about her husband and keeps what she reads about him online and in newspapers at a minimum.

She said leaving Twitter was one of the “practical things” she has done for her “head space”.

“It was overwhelming for me at times. To remain healthy in my head space, I had to come off Twitter,” she said.

A happy home is a blessing, it requires work and humility to create and maintain.

Natalie and I shared some of our marriage secrets in a recent interview. https://t.co/ODQgioQZR6

The couple have been married for 16 years and last year welcomed their third baby.

Mmusi shared the good news on Twitter, revealing their daughter is named Kutlwano.

He thanked God for the new bundle of joy and a new chapter.

“Modimo o re tshegofaditse ka mosetsana. Re leboga Modimo ka Mpho ya bophelo. Ke Rre gape (God has blessed us with a girl. We thank God for the gift of life. I am a Father again),” he wrote at the time.

In 2019, before his exit from the DA, Mmusi gushed about his wife on their 14th anniversary.

He thanked Natalie for “dreaming and building a great SA together” .

“Today been married to this great woman for 14 years,” he wrote on Instagram.

“She has remained such a rock for our family, an incredible mother to our children and an amazing wife to me. Thank you, Rethabile Natalie, for dreaming and building a great SA together. KA Lerato.”

'God has blessed us with a girl': Mmusi Maimane and wife, Natalie, welcome their third baby

Mmusi Maimane and his wife, Natalie, have welcomed the birth of their third child.
News
1 year ago

Mmusi Maimane the romantic: 'Thanks Natalie for dreaming and building'

Mmusi Maimane pays tributes to his wife Natalie on their 14th anniversary.
News
2 years ago

When EFF leader Julius Malema is not politicking or sparking up debates about defying Covid-19 lockdown regulations, he is a hands-on father.
News
1 year ago