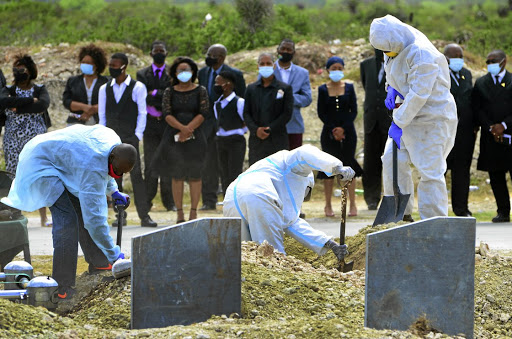 The funeral of a Covid-19 victim at the Motherwell Cemetery. File image
Image: Theo Jeptha

Nelson Mandela Bay mayor Nqaba Bhanga has urged residents in new Covid-19 hotspots to emulate the behavioural change that has been adopted by residents of Motherwell.

The Eastern Cape province recorded 637 new infections in a day, equivalent to 10.9% of the national total, according to data released on Wednesday night by the National Institute for Communicable Diseases.

Bhanga, after a meeting of the joint operating centre earlier this week, raised concerns about current hotspots within the city, which include Walmer, Uitenhage, Lorraine, Summerstrand, Kabega, Algoa Park and Gelvandale.

“The latest report shows that the numbers are increasing and it is up to each one of us to turn the situation around and avert a deadly third wave in our city.

“Uitenhage and Walmer areas are our biggest concern right now, they are in the red zone. In Walmer there are 109 and in Uitenhage there were 115 active cases recorded as at Monday,” he said in a statement.

In contrast, “In Motherwell, there are only nine active cases currently. This is the same place that gave us sleepless nights in the previous waves of infections but we are seeing a difference now.

“They have shown us that if we self-regulate, we can beat Covid-19. We do not want to learn the hard way again and we are pleading with the residents from these areas of concern to change their way of doing things.”

Stop social gatherings, the mayor pleaded, adding: “We have seen that the economically active population and young people are the ones who are moving around and as a result are the most infected right now.”

He said that old-age facilities remained areas of concerns after an outbreak at the Huis Najaar in Despatch on Sunday.

“We urge senior citizens to present themselves for vaccination as we need a herd immunity to win the war against the deadly virus.

“The sooner the Department of Health can cover more elderly people, the sooner the rollout can move to the other groups.”

More than 100 residents in Chatsworth, south of Durban, have been arrested for contravening the Disaster Management Act.
News
10 months ago

'Some patients will expire before we even find a bed for them. That is how bad things are. This is the reality of the situation,' Prof Rudo Mathivha, ...
News
10 months ago